The Australian and Canadian prime ministers have talked down the idea of co-ordinated global action on climate change. 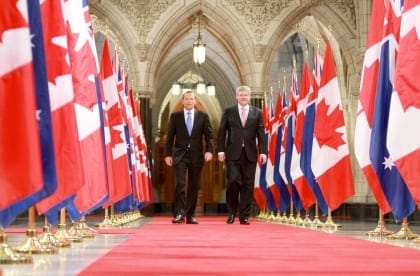 Australia and Canada have poured cold water on the prospects of a global deal to tackle climate change.

Prime Minister Tony Abbott and Canadian PM Stephen Harper met for talks on a range of issues including trade, investment and energy policy in Ottawa on Monday.

The meeting follows US President Barack Obama announcing an aim to reduce emissions from power stations by 30 per cent by 2030 and calling for greater co-ordinated global action.

Mr Abbott, who will meet with Mr Obama in Washington DC later in the week, told a joint media conference with Mr Harper his government believed in strong action on climate change.

“It’s not the only or even the most important problem the world faces but it is a significant problem,” Mr Abbott said.

“And it’s important every country should take the action that it thinks is best to address emissions.”

“We shouldn’t clobber the economy,” he said.

Mr Harper said he did not feel additional pressure from the US policy move.

He said the US policy in relation to electricity did not go as far as that implemented in Canada.

“It’s not that we don’t seek to deal with climate change,” he said.

“We seek to deal with it in a way that enhances our ability to create jobs and growth.”

He said this was also the position of most nations around the world.

“No country is going to take actions that are going to deliberately destroy jobs and growth.”

Opposition Leader Bill Shorten says Mr Abbott has “flat-earth” views on climate change that are out of touch with world leaders.

“Tony Abbott is sticking his head in the sand and ignoring the problem,” Mr Shorten said.

Labor is calling for climate change to be on the G20 agenda in Brisbane in November.