Convicted murderer Bradley Murdoch claims prosecutors at his trial for the murder of Peter Falconio groomed Joanna Lees to make her less unlikeable. 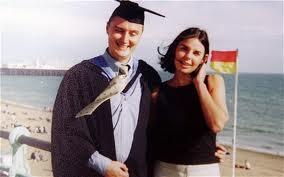 JOANNA Lees was secretly and improperly groomed by prosecutors to appear less chilly and to win a murder conviction against Bradley John Murdoch, he claims.

Murdoch is seeking leave to appeal over the 2001 murder of British backpacker Peter Falconio, of which he was convicted in 2005.

He has maintained his innocence. Mr Falconio’s body has never been found.

Murdoch is serving a life sentence with a 28-year non-parole period at Darwin Correctional Centre, but wants his conviction quashed and a retrial ordered due to “a miscarriage of justice”.

Court documents obtained by AAP reveal Murdoch believes new evidence shows “the prosecution, having formed the view that the personality of their principal witness, Joanne Lees, would `invite such personal dislike as to imperil the case’, secretly, deliberately and improperly groomed her with the intention of changing her demeanour in order to obtain a conviction”.

The evidence is an interview with prosecutor Rex Wild QC, published by News Corp Australia in November, in which he says Ms Lees was a risky witness who controlled her own image so totally that he felt she projected an aura of superiority and defiance that wasn’t being well received.

In the interview, Mr Wild compared Ms Lees to Lindy Chamberlain, and said her focus and cool could have been misinterpreted by the jury.

Ms Lees initially refused to see Mr Falconio’s family when they arrived in Alice Springs, and didn’t speak with his brothers during the trial.

It was also revealed by police that she had been having an affair in Sydney.

Mr Wild said she didn’t behave the way heroines and victims are expected to behave.

Prosecutors put her up in an apartment, flew a friend out from London to be with her during the trial, gave her victim support, security guards, and “paid for the kind of clothes that would make her presentable to a jury”, the court documents allege.

They say that had the evidence of Ms Lees’ grooming by the prosecution been available to the jury during the trial, it is likely Murdoch would have been acquitted.

Murdoch applied for leave to appeal his conviction in the Northern Territory’s Criminal Court of Appeal on Tuesday.

A hearing date is yet to be set.