Inside China’s vast influence network – how it works, and its reach in Australia

SPECIAL FEATURE: The operations of the Chinese Communist Party are generally opaque, especially to outsiders. But in recent years, the party’s reach and influence with the Chinese diaspora has become much more obvious, particularly in Australia. 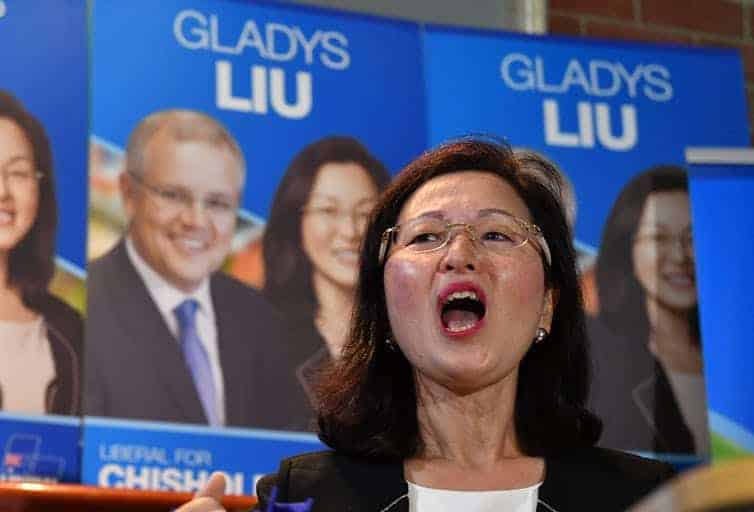 According to the ABC, newly elected MP Gladys Liu is tied to an organisation that’s part of the Chinese Communist Party’s United Front, which exerts influence among the Chinese diaspora. (Mick Tsikas/AAP)

The operations of the Chinese Communist Party are generally opaque, especially to outsiders. But in recent years, the party’s reach and influence with the Chinese diaspora has become much more obvious, particularly in Australia.

Most recently, Liberal MP Gladys Liu, the first Chinese-Australian woman to win a seat in the lower house, was revealed to have ties to the World Trade United Foundation, a body whose officeholders are closely tied to pro-Beijing politicians in Hong Kong.

This follows the resignation of former Senator Sam Dastyari over his contacts with Chinese political donor Huang Xiangmo in 2017, and last year’s passage of a new foreign interference law, which was sparked by concerns over Chinese influence.

What connects all these elements is the Communist Party’s little-known United Front Work Department. The successes of this department have been crucial to building the party’s legitimacy at home and, to a significant extent, abroad, especially with overseas Chinese communities.

What is the United Front?

The United Front Work Department, or UFWD for short, is a special department of the Communist Party. It is responsible for organising outreach to key groups of Chinese citizens, including ethnic Chinese abroad, and representing and influencing them.

In its simplest terms, the UFWD is about uniting those who can help the party achieve its goals and neutralise its critics. Its work is often summed up as “making friends”, which sounds benign, and often is. But it can have other meanings, such as helping to stifle dissent at home and abroad.

Overseas Chinese, including those in Australia, have a special place in this system and are actively courted by dedicated UFWD representatives.

How its mission is changing under Xi Jinping

The United Front has become much more prominent since Xi Jinping became Communist Party general secretary in 2012. Xi has been instrumental in raising its status in the Chinese political system and publicly supporting a dramatic expansion of its roles and target groups.

Under his watch, the UFWD’s work has become much more centred on promoting the party’s key ideals. These include the consolidation of Xi’s leadership and spread of his ideology (known as “Xi Jinping Thought”), and the broader goals of ensuring social stability and China’s national rejuvenation.

While China already has sovereignty over Hong Kong and Macau, the United Front has been crucial in helping the party exert influence over local politicians, trade unions, and business groups in both regions. However. the current unrest in Hong Kong shows this approach may have lost some of its effectiveness.

United Front is also one of the ways the party stakes its claim to popular legitimacy and to representing all Chinese people throughout the world.

One way the department does this is by carefully vetting members of key social and occupational groups, such as doctors and lawyers, who provide the government with expert opinion on proposed laws and other issues during “consultative conferences.”

Those selected to take part in these conferences are assumed to have considerable influence and prestige. And they include a number of overseas Chinese, including some Australian-Chinese.

All members of these conferences are carefully screened by the UFWD for their political reliability and willingness to accept party leadership and its positions.

Many provocative ideas and issues that can’t be raised in the party itself or in the People’s Congresses are often floated in the consultative conferences.

This system of garnering expert advice and channelling it back to the party is central to its claims to be democratic. The party maintains that this system of consultation is superior to Western democracy because it is more representative and doesn’t suffer from the “chaotic” results of Western-style elections.

This system is even more important since the party has given up on its own longstanding experiments with village-level electoral democracy. These elections failed to deliver on the initial promise of bringing greater efficiency and legitimacy to the party, and instead often became dominated by local special interests pushed by powerful families, clans or even gangs.

How United Front is exerting its influence

Under Xi, there has also been a dramatic shift in what the UFWD is expected to achieve. Much of its work since the 1980s has focused on incorporating new interest groups into the political system (such as entrepreneurs and professionals) to prevent the emergence of any organisations outside the party’s control.

Now, it is much more about assimilation – all members are expected to believe the party’s central ideology and promote Xi as China’s “core leader”.

In a sense, we are seeing a process similar to that of the 1950s, when United Front was first used to organise groups like intellectuals, religious believers, and business people and provide them with nominal political representation in the consultative conferences – in some cases as government ministers.

The next step was forcing them to accept the Communist Party takeover of their businesses, churches, or associations. The United Front also demanded they fully accept socialist ideology through campaigns of intense, and sometimes violent, “thought reform,” which left many dead.

Today, it is minorities such as the Uyghurs, Tibetans, and Christians who are again under intense pressure to allow the party to take full control of their organisations. This often includes the demolition of property and the severing any links with foreign religious groups and NGOs. The UFWD is the organiser in the background.

The flow-on effects of these changes in Australia is an intensification of the party’s efforts to unite with and influence the Chinese diaspora, and use them to promote the party’s causes and positions. Or at the very least, not to oppose them.

We have seen a dramatic proliferation of United Front-linked organisations in Australia, such as the Australian Council for the Promotion of Peaceful Reunification of China, as well as new religious bodies and industry and cultural associations.

The marginalisation of sensitive issues like Taiwan among Chinese-Australian communities, the lack of support for China’s Muslims and other persecuted religious minorities, and the very muted responses to the protests in Hong Kong, seems to indicate that these efforts are bearing fruit.

As China grows more powerful and influential, the New Superpower series looks at what this means for the world – how China maintains its power, how it wields its power and how its power might be threatened. Read the rest of the series here.