Hockey delivers some costings, no surplus

AUSTRALIAN ELECTION 13 | Shadow treasurer Joe Hockey has announced $31.6 billion of promised budget cuts, but he remains elusive on the timing of a promised budget surplus. 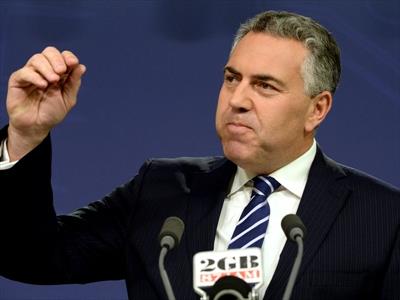 SHADOW treasurer Joe Hockey has promised no cuts to health and education, or any rise in the GST if the coalition wins the federal election.

But he can’t say when an Abbott-led government would deliver a budget surplus.

Mr Hockey released his interim costings, which included $31.6 billion of savings over the next four years, in an attempt to end a Labor “scare campaign” over what the coalition plans to do in government.

However, voters will have to wait another week to discover the full list of the coalition’s election spending promises and the projected net impact on the budget bottom line.

“After six years of Labor getting every single budget number wrong, enough is enough,” Mr Hockey told reporters in Canberra on Wednesday.

Mr Hockey was later quizzed on the timing of a surplus during a debate with Treasurer Chris Bowen at the National Press Club in Canberra.

He pointed to the budget risks outlined in the pre-election fiscal and economic outlook (PEFO) – the independent analysis provided by Treasury and Finance.

“From my perspective I want to make sure we know what the worst case scenario is so we can prepare for a rainy day, rather than budget and spend on the expectation of the best case scenario, which is a reflection of everything Labor has done for six years,” Mr Hockey said.

Mr Bowen said Mr Hockey was offering “a lot of huff, a lot of puff, a lot of bluster, a lot of blowing but no date”. Labor has committed to a $4 billion surplus in 2016/17.

Under Mr Hockey’s savings plan, the public service will take a $5.2 billion hit from the shedding of 12,000 jobs – although the Community and Public Sector Union believes it could end up being more.

Other savings were already flagged – like the scrapping of business measures linked to Labor’s carbon pricing regime.

The minerals resource rent tax (MRRT) will also go – and so will most of the initiatives it was supposed to fund – such as abolishing the school kids bonus for a saving of $4.6 billion.

Ending the MRRT will also hit small business, including the discontinuation of the instant asset write-off and discontinuing the tax loss carry back for a savings of nearly $4 billion.

Tax experts were unimpressed those business measures would go.

“Discontinuing these measures will be a disappointing blow to businesses struggling in a volatile economy,” The Tax Institute tax counsel Deepti Paton said.

Finance Minister Penny Wong pointed out the tax loss carry back – which allows businesses to offset operating losses by claiming previously paid taxes – was supported by coalition partner the Nationals.

“It is a truly bizarre situation,” she said.

“We should turn things on their head and get both parties to rule out a return to surplus until steps have been taken to prepare our economy for the long-term,” he said in a statement. – AAP