Mike Rann, Australia’s high commissioner in London, makes more than the average former SA politician, with the help of a superannuation quirk. 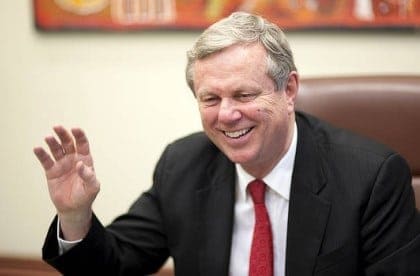 Australia’s High Commissioner to the United Kingdom Mike Rann is earning almost AUD $500,000 a year due a loophole in politicians’ superannuation laws.

As High Commissioner to the UK, Mike Rann earns up to $276,000 a year from the Federal Government. Having served as South Australia’s Labor premier from 2002 to 2011, he also collects $208,000 a year from the state’s parliamentary superannuation scheme, according to News.com.au

Former Australian immigration minister and Liberal Party federal senator for South Australia, Amanda Vanstone told the Sunday Mail the public would “expect the same treatment for one level of government as the other’’.

“The rules are different and many people would query why they differ,’’ Ms Vanstone, who was appointed ambassador to Italy following her parliamentary career, said.

According to South Australia Ratepayers Association President Kevin Kaeding, it’s a burden on taxpayers and in future all former politicians should have a reduced super income when holding a diplomatic posting, regardless of whether they served at state or federal level.

Nick Xenophon, incumbent Independent senator for South Australia has also weighed in on the debate. According to Mr Xenophon it is unfair that Mike Rann is getting a double benefit and said it’s “a bit rich that former federal MPs have their pension cut if they take a diplomatic post but ex-state MPs don’t’’.

“That is, there would be a commensurate reduction in salary for the diplomatic appointment, taking into account the state pension or benefits the former state MP may have,’’ he wrote.

As Australia’s High Commissioner to the UK, Mike Rann receives free accommodation at the £17millon Stoke Lodge in Kensington, London. He also has a budget to fund official functions and may employ staff including a butler, maid and chef, according to the Department of Foreign Affairs. He also has access to private use of a car from the Executive Vehicle Scheme.

There are rumours that Mr Rann will soon become Australia’s ambassador to Italy — where his wife Sasha Carruozzo has family – making room at the High Commission in London for another former SA politician and ex-foreign minister … Liberal Party stalwart Alexander Downer. Mr Downer would be subject to the 50% reduction in his super payments while being paid as a diplomat, having been a federal MP.