ANZAC DAY IN LONDON | In a solemn and moving dawn service at the Australian War Memorial at Hyde Park Corner, High Commissioner Mike Rann paid tribute to our fallen comrades, and the architects of who and what we are today. The full transcript of his address is below. 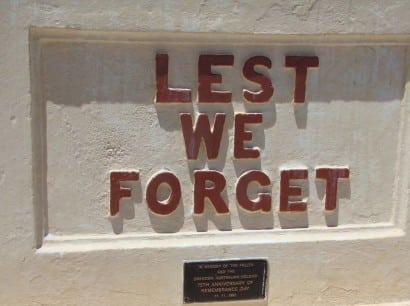 “On this 98th anniversary of the Allied landings at Gallipoli, we gather at hundreds of dawn services around Australia and New Zealand; here in Britain; in the steaming heat of Papua New Guinea; in a chill morning of a Flanders field; at Fromelles and Villers Bretonneux, in Turkey and in ceremonies around the world. And on this day we honour a special relationship between Australia and New Zealand forged in mud and blood.

The statistics tell a stark story. During the First World War, 38.7 percent of the total male population of Australia, aged between 18 and 44, fought with a casualty rate of 65 percent, the highest of any country. It was a similar story with New Zealand. 42 percent of Kiwi males fought with a casualty rate of 58 percent. It was a conflict that helped define our identities as new nations as well as enshrine a bond between us that can never be broken.

Before ANZAC Day last year, a former New Zealand Prime Minister, Mike Moore, said in Washington, ‘crisis and hardship don’t just build character, they reveal character.’ He said no two nations have ‘sailed, marched and flown further to defend freedom than the ANZACs.’ And to our British friends, the inscription on this memorial poignantly reveals bonds of kinship far deeper and richer than any treaty or alliance. It reads: ‘Whatever burden you are to carry, we also will shoulder that burden’.

But at dawn this morning, in each of us saying our quiet and humble thank you, we mark the everlasting companionship between the living and the dead – a handshake across the void.
There are many ceremonies ahead of us. In a few months we commemorate the crucial Battle of the Atlantic. In August next year we honour the Centenary of the beginning of the Great War. The following year, the 100th ANZAC Day and in rapid succession during 2015, the 75th anniversary of Dunkirk and the Battle of Britain and in the same year the 70th anniversary of VE and VP Days.

And so it will continue with memorial services the following year at the Somme, a battleground which alone claimed more than a million lives. Among them the writers, artists and musicians, the great engineers and doctors, the farmers, factory workers, the husbands and fathers who were not to be. We will sing the hymns and read their names engraved on memorial walls and headstones; the lost company of cheerful friends who have joined the silence for which we are all bound.

And next year here in Britain we will remember that 70 years ago on D-Day, the largest armada history has ever seen, left this island in an operation that was as epic in scale as it was in aspiration.

Their purpose could not be clearer. Europe was enslaved by the greatest tyranny. Proud nations were in chains. Millions were dying in camps such as Auschwitz, Dachau and Bergen Belsen.

Civilisation, itself, was in peril.

Their mission wasn’t simply to storm the Normandy beaches. It was to free a continent.

And all of these events are inter-related.

There could be no D-Day unless the RAF, whose fighter pilots alongside those from Australia and New Zealand and other brave allies, had not won the Battle of Britain. There could be no VE-Day without D-Day.

And today we look back to generations that possessed a quality of spontaneous decency and shared sense of duty. We remember their talents, their promise, their uncompleted happiness, the years never spent with their children, their spouses or their sweethearts. It was a generation that endured bereavement, privation, smashed cities, and enduring separations from loved ones, that is unimaginable to us now.

And today, in a time of terrorism, when the enemy is often unknown and unseen, we honour not only those who have fallen over the years but those who continue to bravely serve us in places like Afghanistan and in peace keeping operations around the world..

So, as we move towards the honouring of a centenary of sacrifice, on this day we remember our fallen comrades as the best of our breed, the saviours of all we cherish and the architects of who and what we are.”