The former star of the TV sitcom Hey Dad! has appeared in a Sydney court, with his lawyer saying he’ll fight charges of sexually assaulting girls. 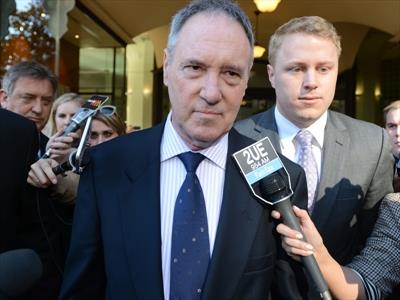 MINUS his trademark Hey Dad! glasses and with his hair now grey, Robert Hughes would be unrecognisable to fans of the long-running Australian sitcom.

Hughes, who is facing 11 charges relating to the sexual and indecent assault of five girls, formally waived his right to a committal in a brief court appearance on Tuesday.

His lawyer Greg Walsh said the one-time TV icon will defend his innocence when trial proceedings begin on Friday.

“This Friday he’ll be before the District Court pleading not guilty,” Mr Walsh said.

“We would probably try and get a trial date depending on court’s availability around September, October this year,” Mr Walsh told reporters outside court.

“I would anticipate it will be a lengthy trial. There could be pre-trial arguments which could take four to six weeks or even longer.”

“His attitude is typical of a man who is doing his very best to deal with very difficult circumstances,” he said.

“I’m rather impressed by the way he’s going about it.

“He’s got loving support from (his partner) Robyn Gardiner and his daughter in England, Jessica.”

Mr Walsh said Hughes was applying himself diligently to preparing for the trial.

Two of the five alleged victims have given a series of print and television interviews accusing Hughes of assaulting them when they were children.

The accusations preceded his arrest in London last year and his subsequent return to Australia where he was charged. – AAP