Hazel Hawke has been farewelled at Sydney’s Opera House with a musical tribute. 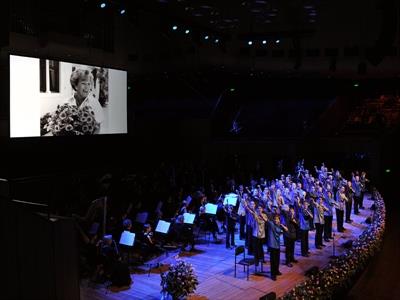 HAZEL Hawke was a devoted wife but had no qualms about putting the man who would become Labor’s most successful prime minister in his place.

Bob Hawke’s career had forced Hazel to be both father and mother to their children, so she was less than impressed when he was named father of the year in 1971, mourners at her memorial service heard on Tuesday.

“Hazel immediately made clear how unimpressed she was by this award and proceeded to let Bob know in no uncertain terms what his shortcomings as a father were,” family friend and former treasurer Ralph Willis said as roars of laughter echoed around the concert hall at the Sydney Opera House.

Twenty-three years after Hazel herself performed a Mozart concerto in the Concert Hall, the scene was recreated with an orchestra and three grand pianos for the 2000 people gathered for a musical tribute in her honour.

Bob Hawke, who arrived with daughter Ros, listened from among the crowd along with Prime Minister Julia Gillard and former prime ministers John Howard, Paul Keating and Kevin Rudd.

The stage was trimmed with white, pink and maroon roses and a supersized black and white photo of Hazel laughing as she carried a tray of flowers.

Gardening was one of her favourite loves, along with her three children, education and music.

One of Hazel’s closest friends, Wendy McCarthy, described her as a woman of her time who took her marriage vows seriously and built her life around her beloved family.

But she was also eager to embrace the feminist movement before revelling in her role as prime minister’s wife from 1983 to 1991.

Ms McCarthy said Hazel relished her newfound independence when her marriage to Mr Hawke ended in 1995 after 40 years together.

So Alzheimer’s came as a double cruel blow when it stuck, finally claiming her life on May 23, aged 83.

“Many times she wept with rage at how it curtailed her new autonomy. She so hated having it,” said Ms McCarthy, a friend of 40 years.

Her eldest daughter, Sue Pieters-Hawke, paid tribute to “the most wonderful mum” who was a moral compass offering “unconditional but not necessarily uncritical love”.

Hazel’s eldest grandson, David Dillon, finished off the service with a poem which read in part: “She built a strong home and raised three fine souls, she mothered and fathered as her man hit the polls.

“Surely enough he was elected for Labor, he led from the front but she was the saviour.” – AAP