Pauline Hanson to seek Senate spot for One Nation

Pauline Hanson is making her seventh bid for parliament, lining up to run for the Senate as a One Nation candidate. 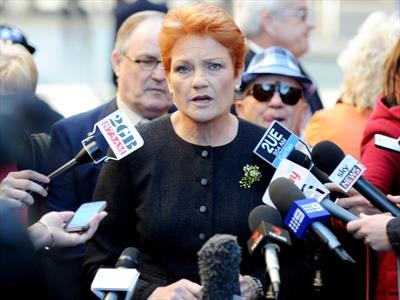 PAULINE Hanson wants voters to think of her as “the redhead you can trust”, but she’s risking becoming known as the redhead who couldn’t take a hint.

The Brisbane-born former fish and chip shop owner and founder of the controversial One Nation Party has stood unsuccessfully six times at state and federal elections over the past 15 years.

On Monday she announced yet another attempt at a political comeback with a tilt for a NSW Senate spot at the federal September poll.

Ms Hanson lost her bid for a NSW upper house seat at the 2011 state election.

She is rejoining the party she founded in 1997, and was chucked out of in 2002, denying her bid is financially motivated and pledging to offer an alternative to “selfish, dysfunctional and egotistical political parties”.

“Yes, I have been in prison. Yes I have been trodden on but I keep getting up,” she said when asked about her repeated attempts at a comeback.

“It tells you I don’t give up easily”.

Ms Hanson said Australia’s political system had thwarted her attempts to run as an independent and she was returning to One Nation as it had remained true to the ideals upon which it was formed, including scrapping foreign aid and adopting strong protectionist policies.

Ms Hanson said it was time to “stamp out the influx of illegal immigrants swamping our shores” and stop the “constant attack on our Australian way of life”.

She also pointed to those who are “ripping off our welfare system at the expense of genuine and worthy people”.

She failed to win a Queensland Senate seat as a One Nation candidate at the 2001 federal election.

But Ms Hanson said members of the right-wing nationalist political party were delighted to have her back.

Unveiling her campaign slogan as “Vote for the redhead you can trust”, she said: “This is our country and we cannot let it be destroyed by foreign ownership, by people who disrespect our way of life, culture and laws.”

NSW One Nation state director Ian Nelson said he had repeatedly asked Ms Hanson to return and now had a leader “with the X factor”.

NSW Greens Senator Lee Rhiannon said it would be disappointing if Ms Hanson’s re-emergence led to another negative debate about multiculturalism.

“The One Nation brand has often been associated with ugly politicking which might grab some headlines but has no place in the upcoming election,” Senator Rhiannon said. – AAP