Hadrian’s Wall stretches 73 miles across northern England, and was once the northern most frontier of an empire which ruled a quarter of the world. I find out more about life up here with my very own Celt to guide.

by Francesca Baker
in News 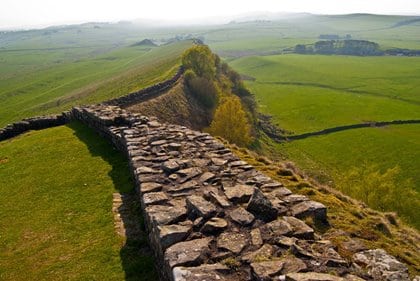 Standing with our backs against the ancient wall, wind billowing against us, we’re asked to try to imagine the scale of the Roman Empire, by Gambax, our guide Celt.

It’s difficult to imagine the size of the empire. To escape Roman rule one would have to go as far south as the Sahara, and as far east as Baghdad. As well as an extensive empire, they had wealth that would rival that of both China and the US combined. A quarter of the world’s population were ruled from Rome. These people knew what they were doing.

We are at Cawfields on Hadrian’s Wall to learn more about what this 73 mile long stretch of wall across northern England meant – to the Romans and local tribes, and for history.

An estimated 4 million tons of stone make up the wall, built ten feet thick, twenty feet high and marked the most northerly point of this vast empire. Although fairly well preserved, the remains today do not do justice to such a grand structure, and so it is with a guide that the meaning and significance is best communicated. Clad in traditional Celtic dress, which includes an eight layer linen shirt, chain mail style armour, a tunic worth a third of the average soldier’s annual wage, and wielding a sword we’re taken on a journey that reveals the military might and cultural impact of the Romans.

Hadrian’s Wall is a UNESCO World Heritage site, and rightly so. A monument to almost four centuries of Roman rule in Britain, it was established by Emperor Hadrian in 117 AD, 172 years after Julius Caesar’s first invasion. The fact that no consolidation of authority had hitherto taken place demonstrates how Roman rule was in many ways integrated into local lifestyle and tribal practices, and is one of the reasons that the Romans were successful. As Gambax tells us, much of their success did not come down to radicalisation but rather taking an organised and practical approach to what people were already doing. ‘The local tribesmen were fiercer and knew the land better than the Romans – they were maniacs – ‘One of their favourite tactics in battle was to chop their enemy’s head off, and pick it up by the hair with their teeth,’ he said. ‘It was incredibly detrimental for an opponent to see an enemy approaching with their friend’s head hanging  out of his mouth!’

This is how the frontier could be maintained and garrisoned not by the Roman Legions but by ‘auxiliary’ troops – soldiers recruited from the conquered lands of the Empire. The local tribes ‘simply were not organised, and fighting against each other – so they just fell apart when faced with such structure and drive.’ we discover.

Fact after fact hits us before we have even begun our mile and a half long walk, but it’s always delivered in an engaging and vibrant way.  Colour and dimension, making history accessible to all and demonstrating how Romans are still relevant is a sign of success from  any tourist or education team. You can read about Hadrian’s Wall on leaflets or information boards, but to really engage with the drama of the location and the power of its founders, it’s best to explore with a local.

Cawfields is an ideal place to learn more. With a dramatic section land falling away in sheer crags to the north and a Victorian quarry to the south, it provides easy access to Mile Castle 42. Thought to have been built by the Second Legion, this structure hangs on the edge of the historic line is one of, as the name suggests, guard style castle style structures that were repeated every mile along the wall. Many were in locations that were largely never attacked, but the regularity and uniformity of the way in which Romans worked meant that they still built them. More prominent and defensively important were the 16 major forts. Each could house 800 soldiers and had its own prison, hospital, bakery and stable, and the remains can be seen today at Chesters and Houseteads.

The scenery and nature which you see from the wall is also something to behold. Here in Northumberland we have seen some of the most beautiful countryside in the UK, with fields and rolling hills stretching away into the distance. It would have been a dark and desolate place to defend in winter indeed. Success came not through adversarial and subjugating tactics, but a way of life that assimilated local people – trade, marital and familial relations were all built up over the four hundred years of Roman rule, all of which assisted in the solidification of their power.

It’s windy and cold, my friend has a leg injury, but still we want to know more, and our descent into the ‘vallum,’ the ditch which ran parallel to the wall as an extra form of defence and a road is a sad moment, indicating as it does that we are coming to the end of this immersive tour. But Cawfields is just the start, of our journey at least, and Northumberland and Cumbria are full of museums and sites to see, including the vast Vindolanda museum, the busy and bustling Corbridge Roman Town, and Chesters Roman Fort, home to one of the best preserved bathhouses. As we drive away to carry on our exploration, our historical adventure and immersion into that empire has only just begun.

I walked this section of Hadrian’s Wall with Wild Dog Tours on their Roam With A Roman walk.