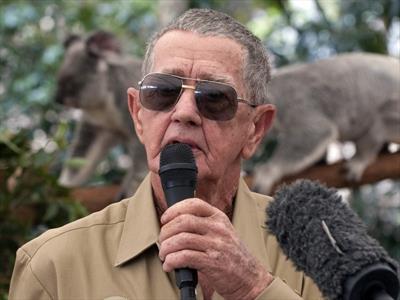 Bob Irwin says Australian politicians need to “grow some balls” when it comes to standing up for the environment.

“That’s something we’re really lacking in this country,” the environmentalist and father of the late crocodile hunter Steve Irwin says.

“We need politicians with the balls to be able to make decisions that benefit our country without worrying about money.”

In 2011 Mr Irwin considered a tilt for the Queensland seat of Ashgrove – the seat Campbell Newman ultimately won to clinch the premier’s job.

But he ultimately decided not to run believing he could do the environment greater service from outside parliament, where he wouldn’t be expected to toe any party’s political line.

He says he’ll never again consider a career in politics, preferring instead to spearhead direct action such as the Fight for the Reef campaign aimed at stopping the “industrialisation” of the Queensland coast.

The campaign, which includes TV, radio, online and newspaper ads, takes a swipe at the Queensland government for “fast-tracking” port and industrial developments along the reef’s coast.

“One of my main concerns is that up until now it has been acceptable to use our ocean as a rubbish dump,” Mr Irwin says.

Of particular concern is the proposed dredging of three million tonnes of soil to expand the Abbot Point port near Bowen.

He says Gladstone Harbour is also being decimated.

Mr Irwin and the campaign’s supporters want a moratorium on all developments along the Queensland coast until experts are satisfied there won’t be any long term effects on the reef.

Last week he gave public talks in Rockhampton, Cairns, Bowen and Townsville on the subject.

“All that I want is for people to understand that there are real threats there and for them to make their own decision. Really it’s up to the people.”

Mr Irwin says he’s been challenged at times about how he’s qualified to make such claims.

“I’m not a scientist, I’m not a professor. All I have is 60 years of observation and many years of research into Australian wildlife,” he says.

“If I can’t learn something in that time then I really haven’t done very well have I?”

He fears the reef will be destroyed if Australia remains on its current path.

It’s a concern shared by the World Heritage Committee, which has said the reef could next year be listed as a World Heritage site in danger if new coastal development aren’t restricted.

“Do we, as the most destructive force on this planet, have the right to destroy or even risk destroying something that’s taken millions of years to be built?” Mr Irwin asks.

“It’s the most beautiful place on the planet, I think.”

With the federal election looming, the environmentalist wants to see more policy discussion on how to protect Australia’s natural assets.

“Politicians need to realise that whatever they do to this country they will eventually do to themselves,” he says.

“The tourism, food and fishing industry are all tied into the environment. If we stuff up the environment enough will we even be able to feed ourselves?”

He puts great faith in the role younger Australians will play in compelling politicians to act.

“They are the ones that are going to be making the decisions well into the future. I’m not saying they need to be politicians but we need to get them involved in the process.