The Great Escape: Daring to do Devon

On a weekend where the rest of England decided to escape to Europe, ALEX IVETT dares to do Devon instead, and experiences first-hand what a weekend in the English countryside can really offer.

IT’S Friday afternoon before the last long weekend in August. There is a collective flurry of activity, as Londoners mentally check out, swarming onto trains and buses with their budget-airline friendly wheelies to confront the chaos ahead at Gatwick, Heathrow, or god forbid, Stansted. An hour to the airport, another through security and a desperate run across the departure lounge and they’re there — almost. Only a few more hours to that beach, that ruin, that wilderness.

For those left in London, an eerie calm descends as the city empties like a populace fleeing an impending apocalypse. What’s left for those who didn’t preplan their weekend getaway with military precision, or those can’t rustle up their enthusiasm to subject themselves to another overseas flight? Is there any way to make the most of a three day window of opportunity, without making a mad dash for the exits of England? 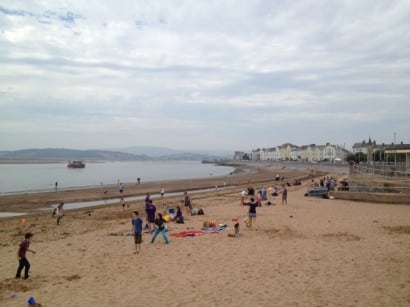 Dare to do Devon

Dare to do Devon, I’m told – give the south-west a chance. Though the sentiment could equally be take a chance on the Cotswolds, or live it up in the Lakes. England, apparently, has a wealth of holidaying opportunities, right at our adopted doorstop. For Australians who moved to the UK in order to abuse its proximity to Europe, this may initially sound like heresy. However, after following the advice by spending a weekend soaking up the delights of the East Devon countryside and coastline, I’d agree that there is a lot more to our backyard than meets the eye.

Soak up the sun

As one of England’s largest counties, planning a holiday to Devon involves not only a decision between home or abroad, but also determining what type of English holidaymaker you are. With enough twee B&B’s and clipped hedges to satisfy even the fussiest Devonshire tea and clotted cream devouring traveller, there’s always the option to opt for the quiet life deep amongst the green rolling hills.

However, for those more inclined towards movement, Devon also offers an unexpected opportunity to get active and really experience the landscape — not just view it. Devon is home to the Dartmoor and Exmoor national parks, a rural and hilly interior, and two long, cliff-coated coastline, offering a wealth of walking opportunities.

We base ourselves in East Devon, at the comfortable Woodbury Park Hotel, secluded in the green hills above Exeter. With a golf course and spa, it seems to capture those two aspects of Devon appropriately — relaxation vs activity. It’s also near to Exmouth, a convenient gateway to the Jurassic Coast — a series of spectacular cliffs designated as a World Heritage Site.

Exmouth is also where we head to get our first taste of ‘active Devon’, being the base for outdoor adventure business Edge Watersports and Kitesurfing. The area is a hub for adrenaline addicts looking to harness the gusts of wind coming in off the English Channel , creating the perfect conditions to jump, spin and ride  the white capped waves of the Exe Estuary.

Unfortunately for us the wind isn’t willing to play ball, but we get a taste for the sport from co-owner of Edge and four-times world champion kite surfer, Steph Bridge, who shows us how to fly the practice kites after a paddleboard along the coast.  In addition Steph shows off her impressive knowledge of the area with some handy hints to make the most of the rest of the weekend. 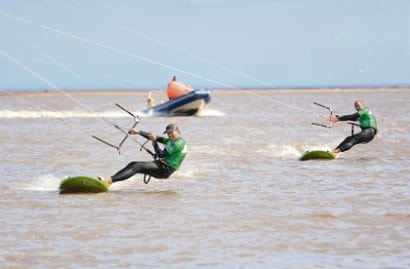 The next day, the wind is making up for lost time and a bevy of kitesurfers are out in force amongst the bobbing boats dotting the river mouth. As the colourful kites twist and swirl in the sky, their handlers dancing like puppets at the end of a piece of string, barely touching the waves, I vow to come back and experience it for myself.

Luckily the next day’s activity is only dependent on the sun, and it doesn’t let us down. Along the two sides of the of the River Exe, which reaches up from coastal Exmouth to the county capital Exeter, is a 26 mile, mainly flat cycle/walkway. A passenger ferry across the river mouth from Exmouth to Starcross completes the loop of this relaxed path which ducks through quaint English villages and past rolling green fields.

We hire bikes from Exeplore Limited, a friendly company which offers well maintained bikes, and a free drop off and pick up service from your accommodation to your bike area of choice. The owner takes us to our start point at Darts Farm — a centre for locally grown produce. 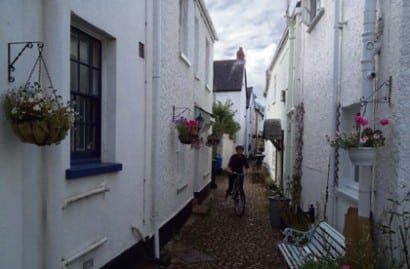 Only half an hour in and we’re already tempted by the traditional pubs we pass along the path as we cycle through the cobblestoned streets of Exton and Lympstone. On Steph’s recommendation however, we’re holding out until we’ve crossed the river via the ferry from Exmouth (ferries depart every hour), and spent another few hours lazily spinning past the wooded hills, stone castles and green fields of the left bank.

The destination — the Turf Hotel (see turfpub.net) — is worth the wait. On a thin peninsula bordered by the Exeter Canal and the Exe River, its patrons spill out the cosy rooms of the old, stone building and onto the picnic benches that dot a grassy shaded beer garden and BBQ area. Accessible only by walking or cycling, it is the perfect place to recharge with a BBQ’d burger packed to the brim, and a nap in the sun. 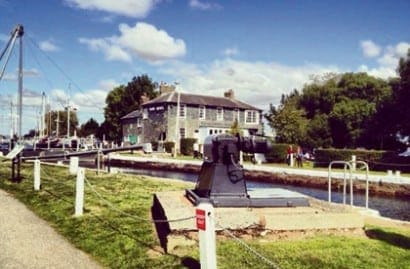 There are more surprises in the village of Topsham, a bit of a foodie haven for those looking to improve the ratio of sitting and relaxing to movement and activity over the weekend, with La Petite Maison and Salutation Inn offering fine dining options. Nearing the end of our cycle, there is also the casual option of a pint by the water at The Lighter Inn — a traditional 17th century pub with a picturesque quayside location.

To complete the trifecta of activity the next day we head to Dartmoor National Park, a rugged and hilly wilderness half an hour from East Devon. Covering 950 square kilometers, it is a warren of small hidden villages and wooded glens, topped by tors — bare hills covered in rocky outcrops. There are plenty of areas in which to get lost, and I’m tempted to continue to wander the moors like a lost soul from 19th century English literature. Instead, we head back to London, barrelling down the highway whilst the planes descend above us, ferrying their multitudes of holidaymakers back through the gates.

All I know is next time there’s a mass exodus from London, would last one left please turn off the lights? I’m heading to Devon.