Gone but not forgotten; Rudd legacy leaves divisions in parliament

Kevin Rudd keeps a low profile on his last day in Parliament. 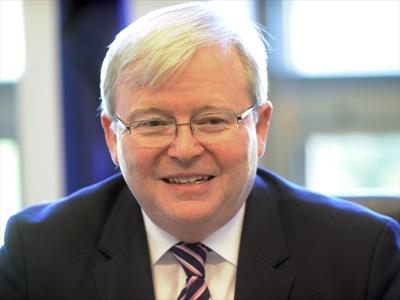 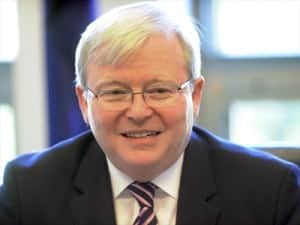 AS Kevin Rudd’s time in federal parliament comes to a close, friends and opponents remain divided over his legacy, with the former Labor prime minister winning some of the strongest praise from the coalition.

Mr Rudd, 56, is retiring from politics to give back some time to his family after 15 years in parliament, including a gruelling three years when he was part of a brutal leadership feud with Julia Gillard.

He kept a low profile on his final day in parliament on Thursday, in his office talking to supporters and responding to well-wishers.

“Best wishes to Kevin, Therese & their family as they embark on the next stage of their lives,” Ms Gillard said on Twitter.

“Quite truthfully, he was a bastard. He was such a vicious, egotistic, ambitious person … he destabilised every leader under whom he served,” Mr Latham told Fairfax Radio in Sydney.

“In the long sweep of Labor history it’s hard to find a character who was more destructive inside the caucus, fuelled by his own personal ambition.”

Treasurer Joe Hockey, who became friends with Mr Rudd when the two walked the Kokoda Track in Papua New Guinea, led the tributes.

“He is a formidable political opponent,” Mr Hockey said, adding Mr Rudd had a great intellect and deserved praise for his “magnificent” 2008 apology to indigenous Australians for past injustices.

He said Mr Rudd’s great weakness was losing support from his own team and from voters, over key policies such as the price on carbon.

“You have to take your team with you. You have to work with your team,” Mr Hockey told ABC radio.

“His weakness is that when he made a decision, he thought the decision would just be implemented. The emissions trading scheme is a classic case in point. He stopped prosecuting the argument.

“Because he was winning the political battle in parliament, he didn’t realise he was losing the community on the ETS.”

“I think his apology in this parliament will be the thing for which he was most remembered,” Senator Milne said.

Mr Rudd’s resignation will force a by-election in his Brisbane seat of Griffith, likely to be held around February, in the first electoral test for new opposition leader Bill Shorten.

The Queensland LNP has started seeking donations to fund the by-election, hopeful of victory after high-profile candidate Bill Glasson won a 5.5 percent swing on September 7, putting the seat within reach for the coalition.

Mr Rudd’s daughter Jessica was quick to rule out a tilt at her father’s seat following reports she could be parachuted in to cash in on Rudd support in Griffith.

She was “flattered” to be considered, but wanted to remain in Beijing with her husband and baby daughter. Her father had also said he wants a democratic ballot to select the candidate.

Mr Rudd will remain active in international relations and set up a foundation to help promote indigenous reconciliation.

“Do I think that Kevin Rudd can usefully contribute to our public life in the future? Yes I do,” Mr Abbott told Fairfax Radio.

But does he think Mr Rudd should be given a diplomatic job? “No I don’t.”