Senior members of Prime Minister Julia Gillard’s office have claimed that the embattled Labor leader would defy convention and refuse to vacate her position in the event of a leadership challenge, forcing MPs to reveal their loyalties in order to force a spill. 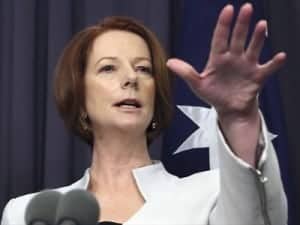 Senior members of Prime Minister Julia Gillard’s office have claimed that the embattled Labor leader would defy convention and refuse to vacate her position in the event of a leadership challenge, forcing MPs to reveal their loyalties in order to force a spill.

Australian Labor Party convention dictates that MPs may hold a secret ballot for the leadership only if there is no one currently holding that position. The existing leader would typically declare the Labor leadership vacant, and stand for re-election to the office against any potential challengers.

In the event that the current Labor leader does not declare the position vacant, a spill is called that would require members of the Labor caucus to vote for a new leader through a show of hands within the party room. This situation has not occurred in any Labor leadership battle since 1954, with every subsequent Labor leader since then electing to avoid an open vote.

Ms Gillard’s willingness to defy convention and prevent a secret ballot for the leadership has been interpreted by Labor Party insiders as an attempt to force MPs that support former Prime Minister Kevin Rudd to publically reveal themselves and face retribution in the event that a challenge is unsuccessful.

Sources within the Prime Minister’s office told The Daily Telegraph yesterday that Ms Gillard would not “give Mr Rudd the luxury” of a secret ballot in the belief that an open ballot would force potential supporters of her opponent to toe the party line.

Referring to the possibility of a “show of hands” ballot, a senior staffer in Ms Gillard’s office said: “They won’t get 51 people to put their hands up.”

Reports from Canberra suggest that many Labor MPs were outraged by the suggestion that Ms Gillard may abandon the secret ballot, with some claiming that it may be the catalyst that would force a leadership spill within the next thirty-six hours. It is believed that several Gillard supporters that had been prepared to switch their votes to Mr Rudd have given them the ultimatum that he must challenge today or face losing their support.

A key supporter of Mr Rudd said: “He is a dead man walking if he doesn’t do this. This can’t go on any longer.”

Another senior Rudd supporter suggested that the former Prime Minister’s revelation that he would travel to China for a conference on Thursday was a ploy designed to pressure his parliamentary colleagues to act on the leadership issue sooner rather than later.

The unnamed MP said: “This is Kevin saying you have two days. I am available but after that all bets are off.”

After losing his second leadership ballot against Ms Gillard in early 2012, Mr Rudd has consistently claimed that he would only return as Labor leader if senior members of the government asked him to return to his former role. He maintained this position during an abortive spill attempt earlier this year, refusing to stand against Ms Gillard even after she vacated her position as leader.