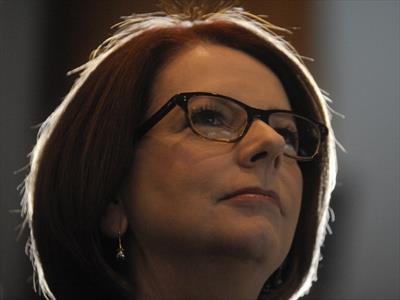 PRIME Minister Julia Gillard continues to stand firm against Kevin Rudd after again declaring the leadership settled, as some of his backers accused hers of being “unhelpful”.

Mr Rudd’s spokesman said the former prime minister stood by his statement that under no circumstances would he challenge Ms Gillard, but the party remains anxious ahead of the last scheduled meeting of the Labor caucus on Tuesday before the election.

On the third anniversary of her overthrow of Mr Rudd, Ms Gillard on Monday said the issue was settled four months ago when Simon Crean led a botched coup against her.

“The issue was settled,” she told reporters.

“I’m getting on with the job with the things that really matter.”

However, cabinet minister Greg Combet called on Mr Rudd to decide what he was going to do, following a similar call from fellow minister Stephen Conroy on Sunday.

“A few things are clear: one is that the prime minister is not about to step down,” Mr Combet said.

“Two is, senior cabinet colleagues are not about to ask her to step down.

“And three is, I think Kevin Rudd does need to decide what he is going to do here.”

The backbencher said the minority Labor government lacked effective communication and the opinion polls – such as the Newspoll showing Labor’s primary vote at 29 per cent – were reflecting this.

Ms Smyth said Mr Rudd and Ms Gillard were both “strong campaigners”, but Mr Rudd had been a “very effective campaigner” in her marginal Victorian seat of La Trobe.

“Three years on, and again we have senior ministers attacking Kevin Rudd,” he said.

“Some of us are still fighting to win our seats.”

Western Sydney MP Ed Husic agreed, saying ministers need to focus “on putting us in the position to win”.

The Australian Services Union revealed a poll of its 2500 members in NSW and the ACT had shown a big swing against the ALP and towards the coalition.

It’s now surveying members to find out if a leadership change to Mr Rudd would sway their vote.

Opposition Leader Tony Abbott has opened a 12-point lead as preferred prime minister in Newspoll – the biggest gap this term.

Three years ago, when Ms Gillard seized the reins from Mr Rudd, she led Mr Abbott 53-29 per cent. – AAP