Prime Minister Julia Gillard has given her colleagues a lukewarm assessment of Labor's chances of retaining government at the final caucus meeting before the 14 September election. 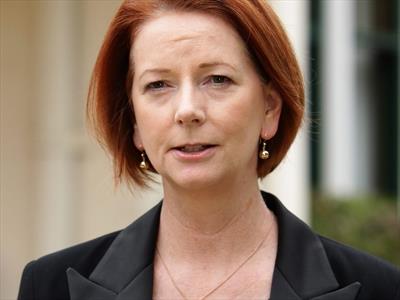 PRIME Minister Julia Gillard has given her colleagues a lukewarm assessment of Labor’s chances of retaining government at the final caucus meeting before the 14 September election.

Addressing Labor MPs and senators in Canberra on Tuesday, Ms Gillard said the party’s electoral strategy would be based on three key policies: school funding, DisabilityCare Australia and the national broadband network.

While Labor was “investing in the future”, the coalition was promising to cut public spending “to the bone”.

However, as opinion polls consistently show Labor losing at least 30 seats, she did not talk up the prospects of Labor retaining office.

One MP quizzed her on why the caucus had not been properly briefed by the party’s key campaign strategists.

Ms Gillard told the meeting preparations were “well advanced” and the key themes had been settled.

The prime minister made more upbeat comments on the election in an interview with the Australian Women’s Weekly magazine to be published this week.

“I can go through a list of seats but I believe we can win seats, the seats necessary to have a majority Labor government,” she says.

“And I would relish the opportunity to lead a majority Labor government.”

However Ms Gillard declined to tell the magazine which seats Labor could pick up in order to hold a lower house majority.

“We’ve certainly got our eyes on running this election to win,” she says.

The Labor leadership was not discussed at the caucus meeting, and former leader Kevin Rudd was not present as he was travelling to Sydney to attend a memorial service for former first lady Hazel Hawke.

Ms Gillard, who is also attending the funeral later on Tuesday, paid tribute to Mrs Hawke at the meeting.

A motion on asylum seeker policy, moved by backbencher Laura Smyth, was lost.

It called for an independent assessment of the mental and physical health of asylum seekers in offshore detention as well as new guidelines for the government’s “no advantage” principle.

The principle, which came into effect last August, ensures that anyone arriving after that time is not processed any faster than those who stay for years in overseas camps.