Gillard honoured to have been first female prime minister

Ousted prime minister Julia Gillard won’t stand at the next election in the Victorian seat of Lalor. 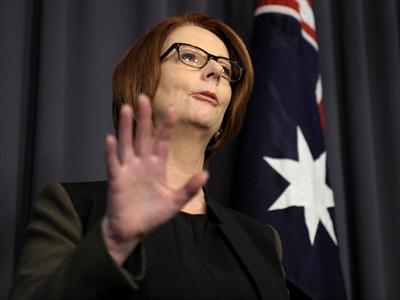 OUTGOING prime minister Julia Gillard says she won’t contest her federal seat at the next election.

She had previously said the loser of the caucus ballot should leave federal politics.

“I have written to the Governor-General, asking her to commission Rudd as Prime Minister of Australia,” Ms Gillard told reporters.

“I will shortly leave from this parliament to see the Governor-General on this matter.”

Ms Gillard will not recontest her Victorian seat of Lalor at the upcoming federal election.

Ms Gillard congratulated Mr Rudd on his election as leader of the minority Labor government.

“When I first put myself forward for consideration as Labor leader in 2010 I had the overwhelming support of my colleagues to do so. I thank them for that,” she said.

“And I thank them for giving the opportunity to me not only to serve the nation but to serve as the first female prime minister of this country.”

Ms Gillard said she had faced the “twin problems” of a minority parliament and “internal division” within Labor.

“It has not been an easy environment to work in.”

Ms Gillard urged Labor MPs and candidates to get out and win the election.

Ms Gillard said there had been a lot of talk about her playing the “gender card”.

“It explains some things and it is for the nation to think in a sophisticated way about those shades of grey.

“What I am absolutely confident of is it will be easier for the next woman and the woman after that … and I am proud of that.” – AAP