Gillard dodges another sandwich, as ACT signs up to Gonski reforms

Several weeks after having a sandwich thrown at her during a school visit in Queensland, Australian Prime Minister Julia Gillard has been forced to dodge more projectile food while announcing the Australian Capital Territory’s signing up to the Gonski education reforms at Canberra's Lyneham High School. 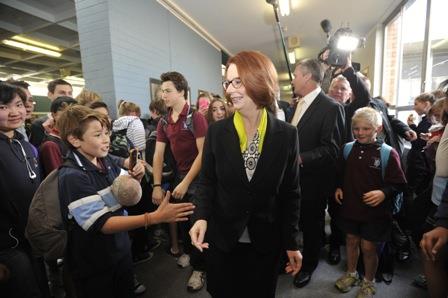 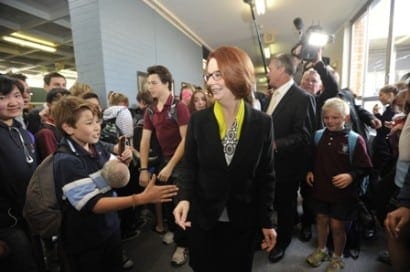 SEVERAL weeks after having a sandwich thrown at her during a school visit in Queensland, Australian Prime Minister Julia Gillard has been forced to dodge more projectile food while announcing the Australian Capital Territory’s signing up to the Gonski education reforms.

Ms Gillard was visiting Lyneham High School in Canberra’s northern suburbs yesterday when she was reportedly hit by a sandwich that had been thrown from the crowd. The sandwich — which appeared to consist of salami and butter spread — allegedly hit Ms Gillard on the arm as she passed a group of students that had gathered to welcome her to the school.

The Prime Minister did not visibly react to the sandwich at the time that it occurred, however she made light of the incident when asked about it in a later press conference. Ms Gillard said that the person responsible for throwing the sandwich “must have thought I was hungry.”

Images from Ms Gillard’s visit to Lyneham High School show that the Prime Minister had otherwise enjoyed a rousing reception from the majority of students, with many banging on classroom windows and enthusiastically trying to shake the Labor leader’s hand as she passed. ACT Chief Minister Katy Gallagher said that the sandwich incident was the result of a “rogue” student, and that most Lyneham High School pupils seemed to enjoy the Prime Minister’s visit.

Ms Gallagher said: “Schools are full of kids, kids occasionally do silly things. Occasionally you’re going to get a rogue student. From what I saw — and I was squashed in the crowd — it was a really excited student population eager to talk with the Prime Minster and she was very generous with her time.”

Earlier this month Queensland student Kyle Thomson was suspended from Marsden High School after being identified as the person responsible for throwing a Vegemite sandwich at the Prime Minister during a visit to the school. He denied throwing the sandwich, claiming that he had knocked it out of another student’s hand in an attempt to protect Ms Gillard.

Ms Gillard was at Lyneham High School to announce that the ACT had joined neighbouring state New South Wales in striking a deal with the federal government to implement the Gonski education reforms. The Prime Minister said that the arrangement would inject an additional $190 million into ACT schools over the next six years, positively impacting on around 62 000 students.

Ms Gillard said: “Every agreement gives momentum to these reforms. In simple terms, these indexation agreements mean all schools in the ACT – government, independent and Catholic — will see fair funding growth each year.”

The Prime Minister has given state and territory governments until the end of June to sign up to the Gonski reforms, which will deliver an additional $14.5 billion to schools across the country. The federal government has pledged to provide around $9.4 billion of this funding, with state and territory governments expected to collectively contribute the additional $5.1 billion to the cost of reforms.