Prime Minister Julia Gillard says a menu circulating on the internet from a Liberal National Party fundraising menu is “grossly sexist and offensive”, and the Opposition should disendorse former Howard government minister Mal Brough as the candidate for the Queensland seat of Fisher. 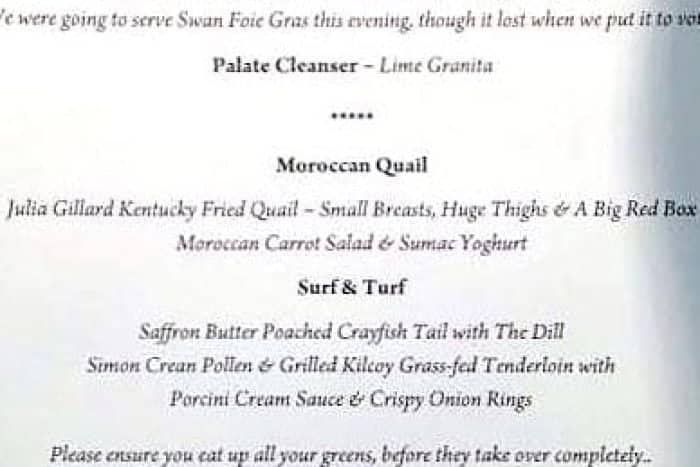 The menu was passed out at the function in Brisbane around Easter for about 20 people hosted by former Howard coalition government minister Mal Brough. Opposition Treasury spokesman Joe Hockey was the guest of honour, but has tweeted he can’t recall seeing the menu.

“It is offensive and inappropriate whenever it was put out and it is now,” he said.

The Liberal National Party has released a statement saying “the content of the menu card was unacceptable and has no place at any LNP event”.

Mr Brough has apologised and says the menu was written by a non-party member who thought it would be “humorous”, but is now “deeply apologetic”.

Mr Brough is running as the LNP candidate for the federal seat of Fisher, held by Peter Slipper, in this year’s federal election.

Ms Gillard says the menu follows a “pattern of behaviour” from the Liberal Party.

“Mr Abbott’s solution to this pattern of behaviour is not to show any leadership. I mean, he’s effectively stood by Mr Brough,” she said.

“Mr Brough is retaining his endorsement, presumably if Mr Abbott becomes prime minister, Mr Brough will be a senior minister in the Abbott government.

“Is Mr Abbott ruling out giving him the portfolio of the status of women?

“Mr Brough should be disendorsed. That’s what should happen here.”

Asked if he would apologise, Mr Abbott said “I condemn it”.

However he said it should “absolutely not” cast doubt on Mr Brough’s pre-selection for the Sunshine Coast seat of Fisher.

“We should always be bigger and better than that,” he told reporters on the Gold Coast on Wednesday.

“Whether it’s a tacky scatological menu at the front of a Liberal party event, whether it’s squalid jokes told at a union conference dinner with ministers present – whatever it is – I think we should be better than that.

“I think we should be appealing to every Australian’s best self as we go into this election.”

It included an item described as “Rudd’s A Goose Foie Gras”.

Mr Rudd was angry about the reference to the prime minister.

“I couldn’t care less about myself, I heard something about the reference to the prime minister,” he told reporters in Sydney.

Mr Rudd attacked Mr Brough, who organised the fundraiser where the menus were distributed.

“It wasn’t a mistake, he knew it was being used,” he said.

“He’s apologised because he’s been found out.”

Mr Rudd said such behaviour was not appropriate in the 21st century and “every dollar” raised at the function should be donated to the RSPCA “as a mark of contrition”.

“If it was some inexperienced bozo out there who had never run for political office in their life … you kind of understand if people weren’t behaving appropriately,” Mr Rudd said.

“This bloke has been an elected member of parliament for many years, a former minister of the Howard government, sees himself as a future leader of the Liberal party, and thought he could get away with a snide, dirty and I think sexist trick.

“It’s wrong, it’s inappropriate and I think he should donate every dollar that he’s raised to the RSPCA.”

Australian Greens Leader Christine Milne said the community would decide whether or not Mr Brough was a suitable candidate for federal parliament.

“The wording on the menu is totally inappropriate and highly offensive,” she said in a statement.- With AAP