A giant radio telescope which has been switched on in remote WA will give scientists a better look at the beginnings of the universe. 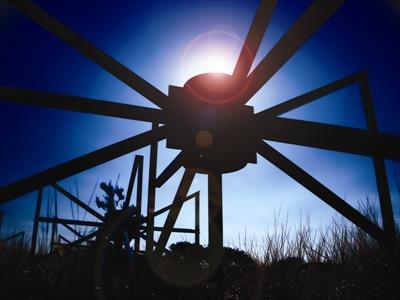 THE TELESCOPE spotted a blue and red blob that looked a little like a fried egg as it began what’s been called one of the great scientific adventures of our time.

The blob was a picture of our sun – seen for the first time through a radio telescope that was switched on in a remote pocket of Western Australia on Tuesday.

The $51 million Murchison Widefield Array (MWA) radio telescope is one of three precursors to a $2 billion “mega-science project”, known as the Square Kilometre Array (SKA) telescope, and is projected to generate tens of thousands of Australian jobs over the next 50 years.

The SKA project aims to develop the world’s largest and most sensitive radio telescope, the low-frequency component of which will begin construction in Australia in 2016.

On Tuesday morning the MWA began collecting data for the first time, as partner agencies celebrated across the country.

It will be used to detect and monitor solar storms and investigate using stray FM audio signals to track dangerous space debris.

The MWA will give scientists an unprecedented view into the first billion years of the universe by enabling them to study radio waves more than 13 billion years old.

Prof Steven Tingay said each of the programs has the potential to change humanity’s understanding of the universe.

The MWA will be used to gain a better understanding of the connection between our earth and the sun, he said.

“This is an exciting prospect for anyone who’s ever looked up at the sky and wondered how the universe came to be,” said Prof Tingay, director of radio astronomy at Curtin University.

He said preliminary results could be seen in as little as three months.

The MWA project is the result of a collaboration between 13 institutions in four countries.

Science Minister Kim Carr, who launched the project in Melbourne, said the telescope opened up huge opportunities for Australian industry.

“There are tens and thousands of jobs to flow from this project,” Senator Carr said. – AAP