A 15-metre goon bag is the eye-catching entry as Perth's Sculpture by the Sea exhibition launches in Perth for its tenth year. 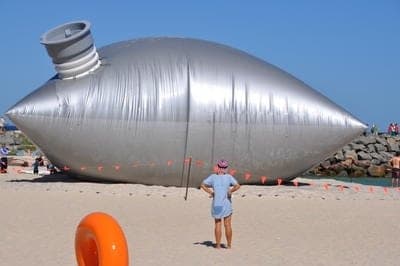 A bogan icon on an industrial scale will dominate the horizon at Perth’s beautiful Cottesloe beach this month, with a 15m wide ‘goon bag’ making the biggest splash at the 10th annual Sculpture by the Sea.

The ambitious work by West Australian artist Norton Flavel, entitled “Bulk Carrier” is one of the dozens of works by more than 70 artists from 12 countries, including Japan, Germany, Portugal and Argentina, which will be exhibited on the beach until March 24.

More than 200,000 visitors are expected to explore the exhibition, which was first brought across to Perth from Bondi by founder David Handley in 2005.

As the exhibition was launched, Japanese artist Hiroyuki Kita was awarded the $50,000 Roy Hill Sculpture Prize, for his piece “Like a Flower Swaying in the Wind”.

The prize, offered by Gina Rinehart’s Hancock Prospecting group, is one of Australia’s top sculpture awards and among the richest art awards in WA.

The bright yellow and Thyssenkrupp stainless steel moving sculpture will be displayed at the offices of the massive Roy Hill iron ore mining project, which have recently been built near Perth Airport.

WA arts minister John Day said the exhibition had become one of the most popular free community events in the state.

“This is an extraordinary display of public art and artistic talent in an everyday environment,” Mr Day said. – AAP

IMAGE: Sculptures as part of the Sculpture by the Sea exhibition on Cottesloe Beach in Perth, Friday, March 7, 2014. (AAP Image/Tim Clarke)