‘Get your hands off it’, says NSW govt to drivers

The New South Wales government have launched a $1.5 million road safety awareness campaign designed to discourage people from texting while driving. The “Get Your Hands Off It” campaign takes a tongue-in-cheek approach specifically designed to target the 20-to-29-year-old age bracket, with the accompanying video going viral.

THE New South Wales government have launched a $1.5 million road safety awareness campaign designed to discourage people from texting while driving after the death of 20-year-old Brooke Richardson, who was killed when her car swerved into a tree while she was trying to retrieve her mobile phone.

Ms Richardson died in a car accident just outside the Victorian border town of Cobram last December while on her way to work as a hairdresser. The coroner’s report into her death claims that Ms Richardson dropped her phone while texting, hitting a tree head on at 100km/h after bending over to retrieve it.

Ms Richardson’s mother Vicki claims that her daughter had sent a text to a client asking if she would still be making her appointment at 8.27am on the morning of her death, with emergency services being notified of the accident six minutes later at 8.33am. She said that Ms Richardson’s phone was the only thing that survived the horrific crash.

The fatal crash took place only one month after strict new penalties were introduced by the New South Wales government in an attempt to curb the practice of using mobile phones while behind the wheel. Marg Prendergast, general manager of the Centre for Road Safety, said that it was obvious that the government’s hard-line approach had not worked.

Ms Prendergast said: “We tried to make it really clear that ‘hands-free’ actually means ‘no hands’. However, just drive around Sydney on any given day and you can see that that message hasn’t had cut-through.”

The latest effort by the New South Wales government to combat texting while driving has been specifically designed to target the 20-to-29-year-old age bracket that have been deemed most susceptible to engaging in the risk taking behaviour. The “Get Your Hands Off It” campaign takes a tongue-in-cheek approach to the issue and will be rolled out on many of the state’s buses and taxis.

New South Wales Roads Minister Duncan Gay said: “(The phrase) provides the community with a cheeky phrase that empowers them to speak out against friends and family who use their phones in a reckless manner behind the wheel. It’s a campaign to get to Gen Y. You can’t always get to the people that are offending in the area of using phones in their hands or texting in the usual way.”

The New South Wales government is no stranger to controversial road safety campaigns, with their latest efforts echoing the 2007 ‘Little Pinkie’ campaign against speeding. That campaign insinuated that young men that drove at excessive speeds were doing so in order to compensate for having a small penis, and has been deemed one of the state’s most successful ever campaigns. 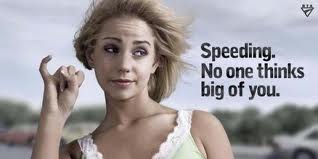 New South Wales police issues more than 42 000 infringement notices to motorists who were caught using their phone behind the wheel last year. The current penalty is a $298 fine and three demerit points.