Ricky Gervais has put his celebrity weight behind the campaign against WA's shark kill policy. 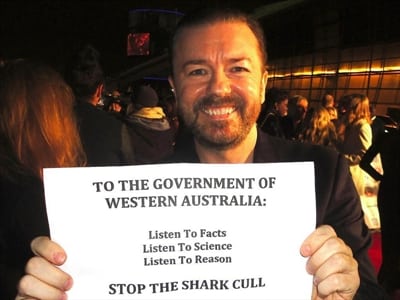 Gervais, the creator of the smash-hit comedy The Office, appeared on social media holding up a sign decrying the WA government plans to catch and kill any shark 3m or over that comes within 1km of a Perth beach.

Gervais was one of several UK celebrities who gave their support to the campaign while appearing at the British National Television Awards overnight.

It read: “To the government of Western Australia – Listen to Facts, Listen to Science, Listen to Reason – Stop the Shark Cull.”

The latest celebrity backing for the backlash against the shark kill policy follows contributions from Sir Richard Branson, who tweeted that the policy “should be condemned around the world”.

Drumlines are set to appear off the south-west coast this week, after federal environment minister Greg Hunt granted WA an exemption under the Environment Protection and Biodiversity Conservation Act, allowing the protected great white shark to be killed.

Plans to set drumlines off Perth beaches have been delayed, after potential professional contractors pulled out because of alleged threats from environmental activists.

A rally against the shark policy is planned for around Australia on 1 February.

On January 4, thousands of people attended a rally at Cottesloe beach – the electorate and home suburb of Liberal Premier Colin Barnett. -AAP