Former Queensland Premier Anna Bligh has revealed that she underwent surgery to have a tumour removed from a lymph node in her neck last week and has been diagnosed with non-Hodgkin lymphoma. 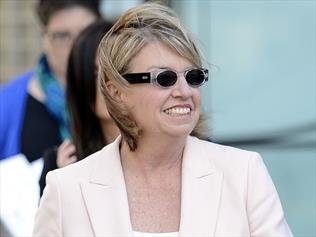 FORMER Queensland premier Anna Bligh has revealed that she underwent surgery to have a tumour removed from a lymph node in her neck last week and has been diagnosed with non-Hodgkin lymphoma.

Ms Bligh, 52, became Queensland’s first female premier after taking over from predecessor Peter Beattie in 2007. She was elected in her own right in 2009 and served for almost five years before the ALP’s loss to the current Newman Government in March last year.

Ms Bligh said: “I am very grateful for the excellent care I have received from the staff of St Vincent’s Hospital in Sydney, and the loving support of my family and friends. I am maintaining my positive attitude as I prepare for treatment.”

Non-Hodgkin lymphoma is a type of cancer affecting white blood cells, which are an integral part of the human immune system. Those diagnosed with the disease can be treated with a combination of chemotherapy, immunotherapy, radiation and stem cell transplantation with a survival rate of around 71%.

Ms Bligh’s revelation was met with a wave of support from many high-profile Australian politicians including Andrew Fraser, who served under Ms Bligh as Treasurer and has described his relationship with the former Labor leader as “unconventionally close.”

Mr Fraser said: “Our family was absolutely devastated when we heard the news. But we knew that there is one person singularly capable of overcoming barriers and defying gravity — and doing it all with a radiant smile — and that is Anna.”

Prime Minister Julia Gillard also offered her public support to Ms Bligh, saying that she was an inspiration to the entire nation. Ms Gillard referred to Ms Bligh’s management of Queensland throughout the 2011 floods, which ravaged the state and resulted in large-scale government programs to rebuild devastated areas.

Ms Gillard said: “Our thoughts are with Anna Bligh and her family. (She was) an inspiration to all Australians as she led Queensland through its darkest moments. Anna’s strength and courage will be crucial as she begins treatment for cancer.”

Ms Bligh and her husband Greg Withers moved to Sydney in late 2012 after Mr Withers accepted a job within the New South Wales public service. Ms Bligh has asked for privacy as she focuses on treatment and recovery.