Sexy beast: Male kangaroos attract mates by striking poses to show off their muscularity and size. 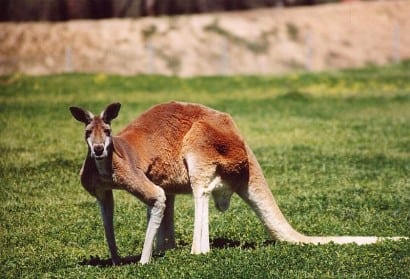 STRONG arms and shoulders in male kangaroos set the girl kangaroos swooning, a team of veterinary researchers at Murdoch University have revealed.

Male kangaroos with beefier chests and arms are more likely to sit at the top of the kangaroo food chain and have a better chance of finding a mate.

Researcher Dr Natalie Warburton said: “Male kangaroos establish and maintain their dominance hierarchy through sparring contests that involve grasping their opponent and using their back legs to box them.

“We found differences in muscle growth for those muscles more likely to be used in these wrestling matches — those involved in clutching and pulling toward the middle of the body.”

The team from Murdoch University found that being at the top of the hierarchy almost certainly improved a male’s chance of securing a female.

Female kangaroos do not display the same level of forelimb growth and their total body muscle measure is in proportion to their size while male musculature was overwhelmingly exaggerated, the study said.

But bigger isn’t necessarily better as all that extra bulk comes with a price.

“Under conditions of extreme environmental stress, there is evidence that male mortality is greater, suggesting that maintaining this additional musculature incurs a significant cost,” Dr Warburton said.