Feel the Rush: Taking a spin on the infamous NÃ¼rburgring

by Lara Brunt
in News NO ONE knowingly signs up for a trip to hell, do they?

Well, I’ve done just that. And, as I scribble my signature on the bottom of the waiver form, I’m starting to get a tad nervous.

Admittedly, my journey isn’t into the fiery pits we’ve all been warned about.

But it does involve hurtling around a racetrack — nicknamed the “Green Hell” —really freakin’ fast.

I’m at the NÃ¼rburgring in western Germany, 50 kilometres south of Bonn, about to take on the infamous Nordschleife (North Loop).

Well-known to motorsport fans, the ‘Ring is hitting the headlines again, thanks to Oscar-winning director Ron Howard’s new flick.

Set against the golden age of Formula 1 racing in the 1970s, Rush tells the true story of two of the sport’s greatest rivals. 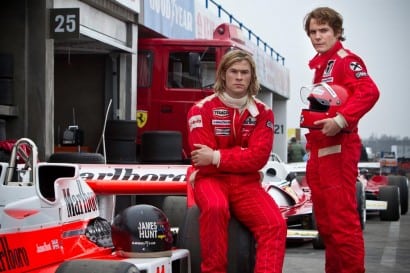 The film focuses on the unforgettable 1976 F1 season and the accident at the NÃ¼rburgring that almost claimed Lauda’s life.

The Austrian crashed in the first lap of the German Grand Prix and suffered terrible burns after being trapped in his car.

Remarkably, Lauda was back behind the wheel only six weeks later, and the World Championship battle went down to the wire at the last race of the season.

Lauda’s crash marked the end of F1 at the NÃ¼rburgring-Nordschleife. The circuit was deemed too dangerous and a new Grand Prix track was built nearby in 1984.

But the legend of the north loop lives on.

It’s still used for touring car races and as a test track by all the big car manufacturers. It’s also a mecca for car fans across the globe.

So what makes the ‘Ring so special?

Since it was completed in 1927, the NÃ¼rburgring is widely regarded as the most challenging racetrack in the world, claiming over 200 lives.

At 20.8 kilometres — roughly four times the length of F1â€²s newest circuits — it is also the longest.

The mythical track twists and turns through the forested Eifel mountains, encircling three villages and a 12th-century castle.

There is no run-off and if you come unstuck on one of its 73 corners, it’s not going to be pretty. 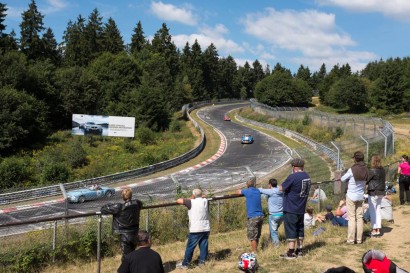 Spectators watch the cars in action at the Nurburgring. Credit Glen Pearson.

The track is open for tourist days when you can do a lap in your own car, or hire one at the circuit from specialist companies (don’t even attempt it in a normal hire car).

After a few minutes watching cars career around the ‘Ring, I’m pretty relieved I’m not in the driving seat.

Instead, I’m a passenger in the BMW Ring-Taxi, a powerful M5 Sedan driven by one of BMW’s advanced driving instructors.

The Ring-Taxi only operates about 35 days every year, so getting a coveted ticket takes commitment.

After first buying a ticket online, you must then book a date for your lap.

The tickets and dates are released every Monday at 9am (UK-time) and the website routinely crashes due to demand.

Finally, a year after cursing our computer every Monday morning, it was time for our high-speed lap.

After a quick “guten tag” to our driver Karl-Heinz MÃ¼ller, my boyfriend Glen climbs in the front passenger seat, while I buckle up in the back.

Karl-Heinz slowly drives about 200 metres to the circuit entrance — and then floors it.

I let out an involuntary yelp, as the car accelerates from 0 to 100km/h in 4.3 seconds.

We’re sharing the track with souped up Porsches, Audis and the odd Mini, but they quickly get out of our way when they spot us in their rearview mirror.

I watch the speedometer climb to 180km/h, as Karl-Heinz expertly maneuvers the car around bends, tyres screeching the whole time.

By the four-kilometre mark, I vow to stop looking at the speedo, as Karl-Heinz masters corners, crests and dips at speeds faster than I care to know.

He does this while casually chatting about football with Glen, who responds in strangled, slightly high-pitched German.

“Stop talking to him,” I mutter through gritted teeth. “Let him concentrate.”

But Karl-Heinz has been driving this circuit for over 25 years and knows it inside and out. Unlike some.

A marshal signals for us slow down. We pass a white Audi that has come off the track, the driver consoling his female passenger. “Abgeflogen,” says Karl-Heinz with a shrug of his shoulders. “Taken off”.

He puts his foot down and we’re quickly flying again ourselves, pressed back into our seats and leaving everyone in our wake.

As we hurtle uphill and around the steep concrete bank of the famous carousel, I’m surprised there’s any rubber left on the tyres at all.

We tear out of a tight right-hander at the 16-kilometre point and I spot a sign warning of danger for the next 1,000 metres. A sign at the start of the track (for the next 20,800 metres) would have been more apt.

It’s only on the final straight that I dare glance at the speedo again, eyes bulging as it nudges 250 km/h.

Just nine minutes later, Karl-Heinz eases the car off the track, as though he’s just been out for a leisurely Sunday drive.

He tells us he’s driven the north loop in less than eight minutes in a BMW M3, “but the traffic slows me down.”

Glen and I, still dumbstruck and sweating, can only mumble a response.

We’ve been to hell and back. And boy, was it fun.

The BMW Ring-Taxi operates between April and October and costs â‚¬225 per lap for up to three passengers. Visit Bmw-motorsport.com.

Rush, starring Chris Hemsworth, is out in UK cinemas on 13 September.