AUSTRALIAN ELECTION 13 | Make your vote count in the 2013 Federal Election by ensuring you correctly complete ballot papers for the House of Representatives and the Senate. 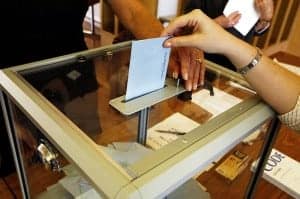 VOTING is our democratic right but the process of electing a candidate can prove confusing. Ensure your vote counts in the 2013 Australian Federal Election by correctly filling out your ballot papers for the House of Representatives and the Senate.

Also known as the Lower House, 150 seats make up the House of Representatives. Each represents an electorate with the Members of Parliament elected roughly every three years.

To vote for an MP in your seat, you must fill-out your ballot paper by numbering all the candidates in order of preference.

The order in which names on the ballot paper is determined by a draw.

‘How to vote’ cards are produced by the major political parties and recommend how they would like you to list the candidates. At this election, for example, the Liberal Party will advise voters to put the Greens last. Voters are not obliged to follow these suggestions.

A candidate must receive 50% of the primary vote (the number of boxes marked 1) plus one, in order to be elected.

If no candidate receives 50%, the candidate with the fewest votes is eliminated and the other preferences on his or her ballot papers are distributed to the remaining candidates.

This continues until one candidate has 50% plus one, at which point seat will be decided.

The Upper House is made up of 76 Senators, including 12 from each of the six states and two each from the two mainland territories (the Australian Capital Territory and the Northern Territory).

The senators from the states are elected for six years, while those from the territories are elected roughly every three years at the same time as the House of Representatives.

There are two ways to vote for a senator. Above the line is the most simplistic option. By placing a 1 in the box of the party you support that party will decide all your preference votes for you.

If you choose to vote below the line, you must number all the candidates in order of your preference. You must put a number in every box, or your vote will not be counted.

The order in which names on the ballot paper is determined by a draw.

Once a candidate has reached 14.3% of the vote (33% in the territories), he or she is elected. At that point a complex system comes into play to redistribute their other ballot papers.

Voting is compulsory for every Australian citizen aged 18 years or older. If you do not vote and do not have a valid and sufficient reason for failing to vote, a penalty is imposed. Being overseas at the time of the election is considered a valid reason.

There are various options for enrolled voters who are living or travelling overseas at the time of the election. Australia House in London will be open for voting and is the largest polling station, in terms of votes cast, outside of Australia.