ELECTION 2013: First debate between Rudd and Abbott on Sunday

AUSTRALIAN ELECTION 13 | Prime Minister Kevin Rudd and Opposition Leader Tony Abbott will face off on Sunday night in the first debate of the federal election campaign. 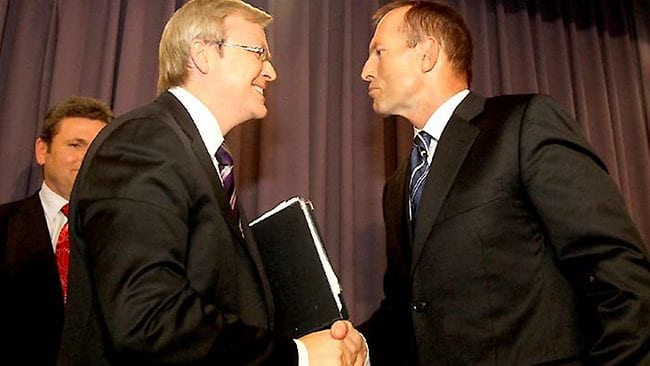 PRIME Minister Kevin Rudd and Opposition Leader Tony Abbott will face off on Sunday night in the first debate of the federal election campaign.

Labor has agreed it be held at the National Press Club at 6.30pm – with conditions.

Liberal Party federal director Brian Loughnane had proposed the venue and a format in which the leaders make opening and closing remarks and take questions from a panel of journalists.

Also read about:  How to enrol and vote in the 2013 Australian election from the UK

ALP national secretary George Wright wanted the Seven Network, in conjunction with Facebook, to host the first debate in Sydney.

However in a letter to Mr Loughnane on Thursday, Mr Wright accepted the Canberra proposal.

The ABC should provide the moderator and a live feed to all networks without restriction, he said.

“We are accepting this proposal on the condition that all major networks have the opportunity to host a debate during the campaign,” he wrote.

Then he asked Mr Loughnane to accept a debate in Sydney, hosted by Seven and with Facebook, on Sunday August 18.

If it went ahead, it would be the first time social networking site has been directly involved with a televised federal election debate.

Mr Abbott has said he wanted three debates with Mr Rudd in total.

Mr Loughnane has written to Mr Wright on Thursday saying Mr Abbott would participate on Sunday and he believes the two other forums they previously proposed should take place.

They had called for two other televised debates beyond Sunday – at Rooty Hill RSL in Sydney’s west and in Brisbane – be held in the lead-up to the September 7 election.

Mr Wright says there should be debates specifically covering national security, the economy and climate change, health and education.

Central banks are stretched to the limit, trying to support the economy during the unprecedented COVID-10 recession. The Bank of...