AUSTRALIAN ELECTION 13 | Right back from when he danced with Kerri-Anne Kennerley on morning TV back on the campaign trail in April 2007, resurrected Prime Minister Kevin Rudd has never stopped at an attempt to show he’s a ‘hip’ politician. KIEL EGGING picks out five of K-Rudd’s best attempts at showing his cool side. 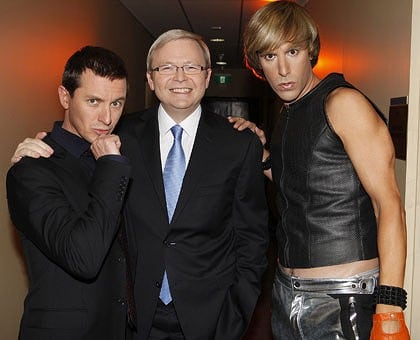 RIGHT back from when he danced with Kerri-Anne Kennerley on morning TV back on the campaign trail in April 2007, resurrected Prime Minister Kevin Rudd has never stopped at an attempt to show he’s a ‘hip’ politician. Here are our top five of K-Rudd’s best attempts at showing his cool side — aside from the antics from his Twitter account, the unique campaign slogans and the thousands of high fives he’s given school kids.

In an appearance on Channel 7’s Sunrise, Rudd was originally on there to announce the winner of his t-shirt slogan competition for the campaign in his Federal seat of Griffith.  It prompted the reporter to reveal her own late entry based on Psy’s global novelty hit Gangham Style, dubbed ‘Rudd-ham Style’.  The end result led to the duo doing 15 seconds of horse-dancing goodness on national TV.  Afterwards, Rudd joked that he shared some similarities with the K-Pop star.

Not one to shy away from pop hits, Rudd was also sprung doing a rendition of Carly Rae Jepson’s Call Me Maybe at a barefoot bowls event with a young supporter in his electorate.  How he got roped into doing so at the Coopooroo gathering remains a mystery, but with a beer in hand, he bumbled through the performance and missed a couple of words while he female friend led the way.

3. HANGING OUT WITH BRUNO ON ROVE

Unlike former Prime Minister John Howard — who rejected all requests, the Ruddster was more than happy to appear on former talk show king Rove McManus’ weekly program, doing so on multiple occasions.  And in 2009, he took it up a notch by posing off camera with Sacha Baron Cohen’s flamboyant character Bruno, who was in town at the time to promote his new movie. 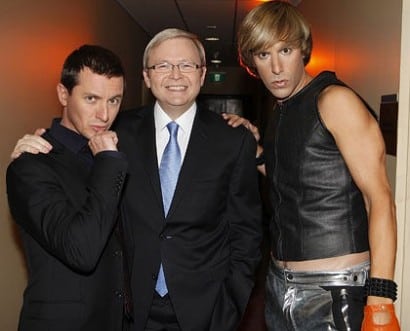 At a press conference the next day, Bruno told reporters: “The reason I’m late is I just had breakfast in bed with Kevin Rudd. That guy is like uber-cute. I thought Obama was the hottest guy in the world until I met Kevin. Amazing.”

Rudd was an avid follower of young sailor Jessica Watson’s efforts circumnavigating the globe at age 16.  And when she came back home to a hero’s welcome in Sydney in May 2010 after seven months at sea, he gave her a rather tounge-in-cheek congratulatory gift — a free driving lesson so she could start learning how to zoom around town on four wheels.

5. WRITING AN ABSENCE NOTE FOR A SCHOOL KID

Showing he hasn’t lost his touch all those years later, just last month, Rudd followed in the footsteps of U.S. President Barack Obama and wrote an absence note for a young child.  Indeed, ‘Mason’ got a rock-star-like excuse for not turning up to class, after he and his mum went and saw the PM at a community cabinet event in Rockhampton.

“Dear Miss Hollis, Please make sure that Mason doesn’t cop it because he was away for Tuesday. He was with me and his mum in Rocky. All the best, Kevin Rudd, Prime Minister,” he wrote.

Furthermore, a snap of the letter was posted on the ‘Kevin Rudd and Labor’ Facebook page, receiving over 2000 likes. 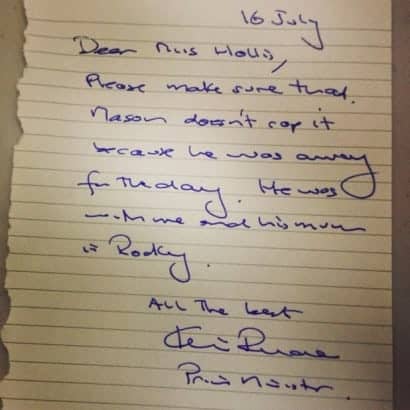 What do you believe have been Kevin Rudd’s best attempts to be cool? Let us know by commenting on the article below or connecting with Australian Times via Facebook or Twitter.