Ecuador has released a statement on the first anniversary of Julian Assange being granted political asylum saying that it wants to resolve the Australian's diplomatic status. 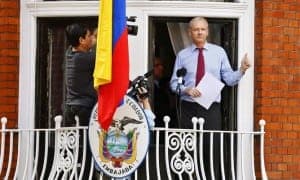 THE Ecuadorean government has released a statement reaffirming their commitment to resolving the status of WikiLeaks founder Julian Assange to mark the one year anniversary of the Australian being granted political asylum at its embassy in London.

Mr Assange was granted asylum by the Ecuadorean government after Swedish police issued a warrant for his arrest to face questioning on charges of rape, sexual molestation and illegal coercion. He was arrested in the United Kingdom in 2010, seeking asylum at the Ecuadorean embassy in London after a British court approved his extradition to Sweden.

While the claims made against Mr Assange in Sweden are not related to his work with WikiLeaks, the organisation fears that extradition to Sweden would be a precursor to American attempts to prosecute the former computer hacker for releasing government secrets online. The documents leaked by Mr Assange included classified military communications, and as such the Australian expat may face the death penalty in the United State of America under the Espionage Act of 1917.

The statement said: “One year ago today Ecuador took the decision to award asylum to Julian Assange, a journalist who feared political persecution after publishing information sensitive to the US government that exposed war crimes, killings, torture and other human rights abuses that would otherwise never have come to light. After thoroughly examining the evidence, the government of Ecuador concluded that it shared Julian Assange’s concerns that there is a real and present danger to his freedoms.”

The statement said: “The decision taken was based on Ecuadorian and international law. As Article 14 of the Universal Declaration of Human Rights declares ‘Everyone has the right to seek and to enjoy in other countries asylum from persecution’. However, Ecuador accepts that resolving Julian’s status and specifically his right to leave the embassy without threat of arrest and onward extradition to the US involves the jurisdictions of three sovereign nations – the UK, Sweden and Ecuador.

“The government of Ecuador remains committed to finding an equitable solution to this situation that respects domestic and international law while at the same time protecting Julian Assange from inhumane treatment and the threats of political persecution.”

Mr Assange is currently standing in Victoria as a candidate for the Australian Senate for the recently established WikiLeaks Party. Unless his diplomatic status is resolved, Mr Assange would be forced to forfeit his seat if he is victorious as he would be unable to return to Australia to officially take on the position.