The economy and tackling corruption in the NSW ALP are on Kevin Rudd’s plate this week, as he gears up for the election. 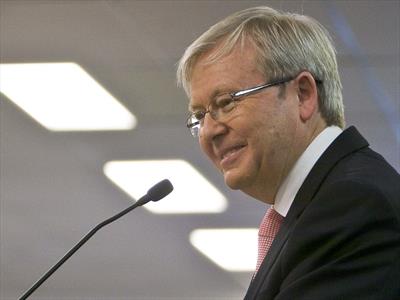 PRIME Minister Kevin Rudd will try to ease voter concerns over Labor’s economic credentials and corruption in the NSW branch before heading to the polls.

Federal cabinet was meeting on Monday to put the finishing touches to a pre-election economic statement to be released on Thursday or Friday.

Mr Rudd is also expected to reveal how NSW Labor will clean up its act after federal party intervention.

The Independent Commission Against Corruption on Wednesday will hand down reports into former members of the previous NSW government, including Labor powerbroker Eddie Obeid.

The federal coalition believes the economy and the ICAC allegations are political weak spots for Labor, especially in NSW where there are 48 lower house seats.

Deputy Prime Minister Anthony Albanese, who is on the government’s expenditure review committee which met on Monday, said the economic statement would forecast a return to budget surplus in 2016/17 while maintaining growth and jobs.

“All of our actions will be completely consistent with the government’s approach of supporting a strong economy, supporting jobs, and supporting fairness,” Mr Albanese said.

The latest Galaxy poll puts Labor and the coalition neck-and-neck and on a two-party preferred basis and in terms of which side voters rate the better economic manager.

But an Essential poll gave the coalition a 15-point lead in terms of managing the economy and a six-point lead on the primary vote.

Opposition Leader Tony Abbott said the Labor cabinet was “in a panic” over the state of the budget, which the government had mismanaged for six years.

Mr Abbott said Labor needed to cut spending and roll out a plan to grow the economy.

If Mr Rudd decides on a September 7 election, it would need to be called by next Monday to cover the minimum 33-day campaign period.

“The fact is that when you look carefully at your Labor candidates, look carefully for their deep association with Eddie Obeid and people that are part of the rotten family of Labor,” Mr Hockey said.

The issue is killing state Labor in NSW, with the latest Newspoll showing the coalition leading the ALP 61-39 on a two-party preferred basis.

The rule changes sought by the prime minister include expulsion of any member found to be corrupt or engaging in improper conduct, a ban on property developers as candidates, a retired judge to oversee disputes, a complaints ombudsman and 50 per cent rank and file members on the powerful administrative committee. – AAP