Dusty enjoys dog treats, sleeps with other dogs and rides around with them on the back of his owner's truck. Dusty the kangaroo is convinced that he is a dog. 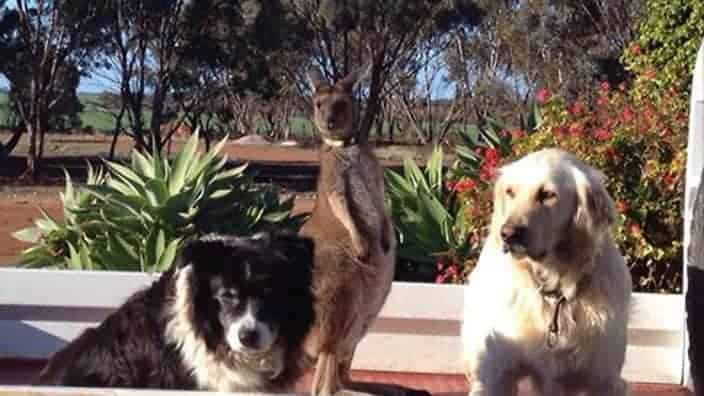 Farmer Ashley Stewart and his family rescued Dusty the joey two years ago, after his mother was killed by a car in a road accident.

Dusty has lived on the Stewart’s back patio at Wittenoom Hills ever since. The family farm is 60 kilometres north-east of Esperance in Western Australia.

Dusty rides around on the back of Stewart’s truck with the other two dogs, Lilly the golden retriever and Rosie the border collie. He wears a dog collar and enjoys dog treats.

“We’ve actually had to go and buy a third dog bed for him to sleep in because he used to pinch one of the beds from the dogs,” Stewart told ABC News.

Stewart said Lilly and Rosie are besotted with their kangaroo.

“He thinks Lilly is his mum, he’s always grooming her, they’re always together and if Lilly goes out of the yard he pines for her and sort of hops up and down the fence until he’s let out to go with her,” Stewart told the publication.

“Every time you walk out the door if he’s not laying in his bed he comes up and wants a pat and a scratch,” Stewart reportedly said.

“He even puts his arms up and wraps them around you like he’s giving you a cuddle.”