What do you see: a blue & black dress or a white & gold dress? And who is correct? Tumblr user Swikd uploaded the following photo with the caption: “guys please help me – is this dress white and gold, or blue and black? Me and my friends can’t agree and we are freaking the f**k out.”

The image of the dress is being added to the list of greatest internet illusions, Doctor Simon Cropper, a senior researcher from the University of Melbourne’s School of Psychological Sciences told SMH.com.au.

The woman responsible for posting the image on Tumblr, Caitlin McNeil, confirmed that the dress is black and blue. McNeil’s friend’s mother wore the dress to a wedding.

“I got to the wedding and the mother was wearing the dress,” said McNeill. “Obviously it was blue and black.”

“I thought my followers on Tumblr would maybe have a good reaction, but I never would have considered that Taylor Swift and Mindy Kaling would be tweeting about it.”

Still not convinced? Well, Buzzfeed managed to track down the dress and settle things…

The dress is in fact a Royal-Blue Lace Detail Bodycon Dress from romanoriginals.co.uk. The dress does not come in white and gold.

So the reason we are seeing different colours? Well according to Buzzfeed, it’s about how your brain is interpreting the light coming into your eyes.

Business Insider went as far as putting the image of the dress into Photoshop to see what it sees. Photoshop found that one of the colours falls on the black/gold border while the other falls on the blue/white border. 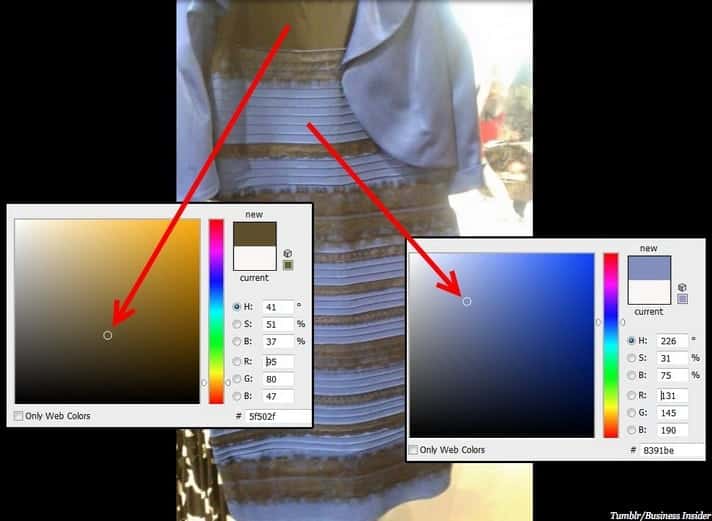 Dr Zena O’Connor colour theory lecturer from University of Sydney’s College of Fine Arts told Syndey Morning Herald that the perception of colour can be likened to the beginning of a relationship – ambiguous, with a few grey areas.

“The perception of colour is always open to variation depending on ambient lighting as well as the labels [the name of colours] that people assign to the colours that they’re viewing. In addition, each digital device (such as computer screens, printers, etc) have a marginally different colour gamut, an internal gismo for colour and this can distort the appearance of colour creating havoc in all sorts of different contexts,” she said.