OPINION | In the aftermath of 22-year-old Australian Christopher Lane's murder in the US, PAUL BLEAKLEY explores the different relationship Australians and Americans have towards firearms, and what we need to do to make sure murders like this do not happen again. 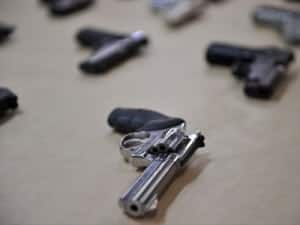 CHRISTOPHER LANE had everything going for him. The 22-year-old from north Melbourne was a rising baseball star, selected to play by an American college on scholarship. He had just returned to the United States of America with his girlfriend after taking her on a four-week tour of Australia to meet his family. By all accounts he was a dedicated sportsman, a loving boyfriend and wise beyond his years.

All of Christopher Lane’s promise and potential ended with a bullet.

Police in the small town of Duncan, Oklahoma, believe that Christopher was the victim of a random, senseless drive-by shooting. They say that the three youths arrested in conjunction with his murder were on their way to commit another, with no motive other than making a name for themselves.

Christopher’s death has provoked a considerable response in Australia, with public outrage that one of our country’s bright lights could be snuffed out so violently. Unfortunately, in America, Christopher is simply a statistic, one of around 10 000 gun-related homicides each year.

Tim Fischer, a prominent former deputy Prime Minister of Australia, has called for a boycott of the US. He says that Australians should not travel to the United States in order to put pressure on the American government to strengthen gun control legislation and put an end to senseless crimes like Christopher’s murder.

Mr Fischer called Christopher’s death the “bitter harvest and legacy of the policies of the NRA” — a reference to the National Rifle Association, a powerful American gun lobby. The NRA have fought for years in defence of the Second Amendment to the US Constitution, which they claim gives American citizens the right to bear arms.

The text of the Second Amendment reads: “A well regulated Militia, being necessary to the security of a free State, the right of the people to keep and bear Arms, shall not be infringed.”

America’s ‘founding fathers’ drafted the country’s constitution in the aftermath of a brutal and prolonged guerrilla war against Great Britain. The importance of a well-regulated militia is, in that context, undoubtedly important. One has to wonder, however, when a “well-regulated militia” turned into three would-be thugs taking pot-shots at innocent civilians in broad daylight.

One of the most significant (and unrecognised) initiatives of the Howard government was the implementation of strict gun control in Australia after the devastation of the Port Arthur massacre. John Howard defied his traditional conservative support base to impose gun control legislation that would keep the country safe.

The challenge faced by the American government in implementing gun control legislation is a different beast to that encountered by the Howard government in 1996. The American people have a special relationship with firearms. For an American, the right to bear arms is a metaphor for the existential concept of ‘freedom’ rather than a practical political issue.

While the American people debate whether people should be required to have background checks before purchasing a firearm, Australian authorities continue to crack down on the rising trend of gun crime down under. The New South Wales Opposition today proposed legislation that would allow police to search individuals without a warrant under a Firearms Prohibition Order.

New South Wales Opposition leader John Robertson dismisses the American emphasis on ‘rights’ and ‘freedom’. He said today: “As far as I am concerned, the day you choose to join a criminal gang and carry a firearm is the day you lose your rights.” The difference in approach between Australia and the US is clear, clearly demonstrating that Australians may never truly understand the intricate relationship between Americans and their guns.

The debate over gun control will rage on, however none of that will help Christopher Lane. The fact remains that a young Australian with the world ahead of him was brutally gunned down as he went on an afternoon jog. His family, friends and girlfriend must now mourn him because a weapon purposefully designed to kill fell into the wrong hands.

Christopher’s death cannot be in vain. It can be an opportunity for Australians to recommit to the fight to prevent the proliferation of firearms on our streets. The alternative would be another Christopher Lane — another innocent Australian gunned down in a random, senseless act of violence.