"The age of entitlement is over. It has to be replaced, not with an age of austerity, but with an age of opportunity," Hockey says as he delivers his maiden federal budget. 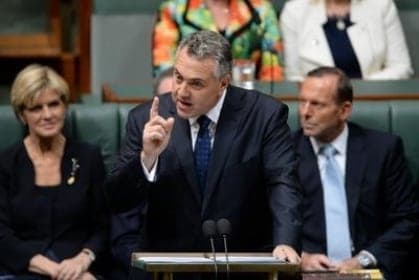 Treasurer Joe Hockey wants the nation to roll up its sleeves and endure wide-ranging spending cuts to return his budget to the black.

Treasurer Joe Hockey says if the government does not make permanent changes to the way it spends money then the budget will never be balanced.

“The days of borrow and spend must come to an end,” he said in his budget speech on Tuesday, as he revealed this year’s deficit was expected to hit nearly $50 billion.

The government expects its budget cuts will slice significant amounts off the deficit over the next few years.

It has forecast a deficit of $29.8 billion for the next financial year, or 1.8 per cent of gross domestic product, a slightly better figure than the $33.9 billion deficit projected in the Treasury’s mid-year review in December.

The figure is expected to shrink even further to $2.8 billion in 2017/18, before the budget finally returns to the black in the 2020s.

Mr Hockey expects all Australians to help out.

“This budget delivers medium term structural budget reform by ensuring spending is on a manageable trajectory, providing a credible path to a projected surplus,” he said.

The government will abolish a range of industry assistance programs as well as introduce more means testing for welfare recipients, reduce foreign aid and introduce a deficit levy for the next three years that will apply to people who earn more than $180,000.

Mr Hockey said wasteful spending must be reined in to order to eventually balance the budget and maintain future surpluses.

The Treasurer said 77 per cent of the improvements to the budget’s bottom line will be because of spending cuts.

The previous Labor government tried on a few occasions tried to turn a deficit worth tens of billions into a wafer thin surplus.

However six months before his last budget, former treasurer Wayne Swan admitted that a surplus was unlikely after it was discovered company tax revenues were falling because of lower commodity prices and the persistently high Australian dollar.