Fire-starters should be classed as "urban terrorists", according to WA's emergency services minister 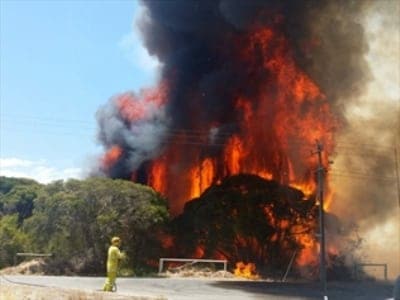 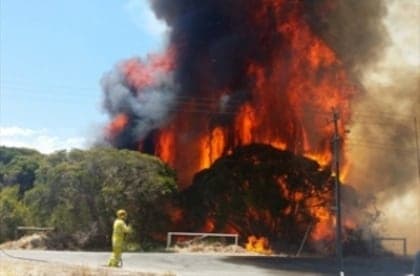 Fire-starters should be classed as “urban terrorists”, according to WA’s emergency services minister, as authorities investigate whether Perth’s latest bushfire was lit deliberately.

A public meeting in the southern suburbs of Banjup, Aubin Grove and Atwell in the City of Cockburn and Forrestdale was told hundreds of properties were saved from the blaze that began on Monday.

Six properties were damaged by the fire, which started after noon and burned through nearly 500 hectares.

Several horses are understood to have perished in the flames.

Having played a part in the fire response as part of a volunteer fire brigade, Emergency Services Minister Joe Francis said suggestions the fire was suspicious were horrifying.

“This is akin to urban terrorism, and people live their lives in fear and have to panic when these massive fires come towards them,” Mr Francis said.

“When someone deliberately lights a fire it is just one of the lowest acts you can do. People have not lost their houses in Banjup yet, but some people have lost pets.”

Nearly 40 power poles were damaged in the fire and will need to be replaced, leaving 110 homes without power.

The fire is under control and no longer moving but firefighters said small flare-ups and hot spots were occurring.

About 60 career and volunteer firefighters from the Fire and Rescue Service, Bush Fire Service and Department of Parks and Wildlife were at the scene on Tuesday afternoon.

A helicopter was used to conduct surveillance of the fire ground on Tuesday morning, with video footage shown to residents.

Another community meeting will be at 4.30pm (WST) on Tuesday at the Atwell Community Centre.