Dancing to the fractured beat of Havana, Cuba

TRAVEL WRITER WINNER | The contagious rhythm of Havana, Cuba sweeps up this month’s travel writer winner, EMMA O’NEILL in its heady, steamy embrace. Emma is our Great Travel Writer competition winner for May, and has won a £250 voucher with Topdeck. 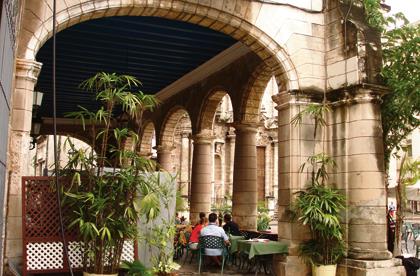 By the time I find the white van heading to my hotel it’s 3am and steamy. The van weaves through Havana’s dark, narrow streets; past houses with too many open windows and past classic American cars that don’t shine like collectables. Groups of men in suit pants and singlets play dominoes in silence under dim streetlights, and kids who should be in bed weave through the legs of women with big hair and loud shirts.

As I walk down Havana’s main esplanade, Paseo de Marti, the next morning, I can’t shake a feeling that someone is about to shout ‘cut’ — the place looks like a movie set. I meet George, my Cuban guide for the day, and glide, at the local’s syrupy slow walking pace, past thick bullet-wounded buildings with ornate windows and rooftop bars. He points to the bullet holes with pride.

“We remember how things were,” he says as his soft smile hardens.

“The young want more, they want Nike and Coke-a-Cola, but they forget, we had nothing, I remember.”

George’s face screws up when he speaks of the capitalist lifestyle yearned for by the younger generation in Cuba — a generation who missed the revolution and are trying to figure out how free education and health care make up for stifled freedom of speech, restricted travel and an avoidance of the global economic market.

In a breezy piazza in the centre of Havana a large group of young men start to argue. They are not far from a statue of Jose Marti, the nation’s El Maestro and my first thought is that they are arguing over politics — I smile at the poetic scene. But my romantic notion of seeing fisticuffs over political passion is crushed when George informs me that this gathering happens weekly, and the topic is baseball. Politics rarely ignites passion in the hearts of Cuba’s youth, George tells me.

Che Guevara and former president Fidel Castro feature in murals close to the piazza. Their faces, fittingly fading and cracked, watch over the city. They watch over men sitting at intersections and on street corners in rusty chairs by themselves; they watch over men in dark alleys trying to interest foreign women in hot Cuban sex and they watch over groups gathering outside corner stores to watch ‘open’ signs flick on – waiting to buy whatever is on the shelf.

There aren’t any shopping lists in Cuba, you walk out with whatever is on offer – one man emerges with a bag of flour and a dozen batteries. And they watch over a tobacco roller with skin like a Grandpa’s leather wallet softly caressing each tissue paper thin piece of tobacco leaf. 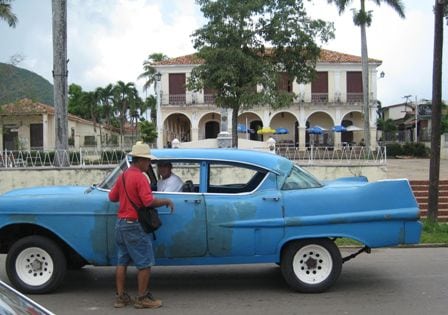 However, just as these political murals, statues and facades don’t overshadow the city skyline, the political system of this nation also, after a while, fades into the background of this complex and delicate town. A town resting on the strong foundation of a people’s survival, people whom I predict will keep travelling to the beat of their own contagious rhythm long after Castro is gone.

As night falls on Havana’s narrow cobblestone streets — littered with art galleries filled with welcoming colour – bands begin to create rhythms that allow men to be beautiful. Male hips pin down beats and roll them into the night. Broad shoulders balance nimble feet as they dance, sweat dripping off sinuous muscles. Thick wristed women sing, bouncing notes from their hips and making harmonies that could slice lemon. The night is young. Cigars are lit and Mojito ice is crushed – politics is forgotten.

As the winner of our Great Travel Writer competition for May, we’ll be sending Emma O’Neill a £250 travel voucher from our good friends at Topdeck. Submit your entries for June now!