Could, should Malcolm Turnbull form a new progressive political party?

OPINION: There is still great public sentiment and a sense of loss in relation to the knifing of Malcolm Turnbull, despite his disappointing political paralysis on so many issues, writes TESS LAWRENCE. If Australia wants Malcolm Turnbull to be Prime Minister again, it’s possible. All Turnbull has to do is form a new and progressive political party. Simples!

If anyone can do it, Turnbull can. And without doubt, he’d gather from disaffected ranks of both parties — and possibly some of those who are leaving politics because of the way he was treated.

It’s a great time for an intervention, a progressive party, a gamechanger, a reset, a grease and oil change, a changing of the guard, a schism of the Liberal party, a dissolution of the dissolute and disreputable two-party system.

Don’t believe his line that he’s now “retired” from politics. That nonsense only lasted for a few hours. No sooner had the pelican landed back home in the activist seat of Wentworth, than he found his beak could stomach more than his belican, after all.

He’s rolled up his sleeves for another non-title political bout as a favour to a mate.

TURNBULL TO BE TEMPORARY “PM” AT OCEAN CONFERENCE IN BALI

Commandeered by his successor, Scott Morrison, Turnbull will now represent Australia at Monday’s fifth annual Our Ocean Conference being held this year in Bali, Indonesia — the world’s largest archipelago.

Here’s why in a gumnutshell.

It’s partly because there is no one in the Cabinet capable of handling the gig – given the baggage of the treacherous manner of Turnbull’s dismissal and the continuance of competing allegiances – and partly because ScoMo hasn’t got anyone he can trust to send as an effective emissary at this late hour, given our jack-in-the-box nature of turfing prime ministers on a dim sim whim.

But – and here’s the larger part – it is because Morrison has cruelled our already fragile relationship with Indonesia by his clumsy and failed attempt to woo the Jewish vote in last weekend’s Wentworth election, by flagging the possibility that Australia could relocate its Tel Aviv embassy to Jerusalem. Beam it up, Scotty! Nice one.

With a population nudging its way to 261 million, about  87.2 per cent or 222 million Indonesians are Muslims.

But hey, you can’t expect ScoMo – who’s only a former Minister for Immigration, Stop the Boats and Lock Up Refugee Children – from knowing that! Too much information.

NoShoScoMo won’t go himself because the Liberal Party might muster another PM coup in his absence. So Turnbull will be standing in for Scott Morrison instead.

We are now reduced to high farce. The man deemed unfit to be prime minister of Australia and usurped by his own colleagues is now going to represent Australia as “Prime Minister”. Go figure.

What is more, Morrison said it was in the national interest to send Turnbull.

It was, of course, clearly in the national interest for Turnbull to have remained PM.

Turnbull gets on well with Indonesia’s President Joko Widodo, as he does with many on the world stage and, importantly, when PM, both Turnbull and then Foreign Minister Julie Bishop both publicly rejected calls from the likes of Tony Abbott and others to reposition our embassy to Jerusalem.

This is a conference of great importance, even if the man who would be prime minister, Home Affairs Minister Peter Dutton, was caught out joking about the drowning at sea of entire islands in the Pacific.

He made his distasteful comments as Immigration Minister, two years ago, when Dutton was having a bit of a “larf” with the lads — then Prime Minister Tony Abbott and then Minister for Social Services Morrison.

“Time doesn’t mean anything when you’re about to have water lapping at your door.”

Such remarks are even more unfunny when compared with the stark reality of violent weather extremes, rapid climate change, man-made and reprehensible environmental vandalism and chemical and other pollutants of the earth, waterways, oceans and the air. 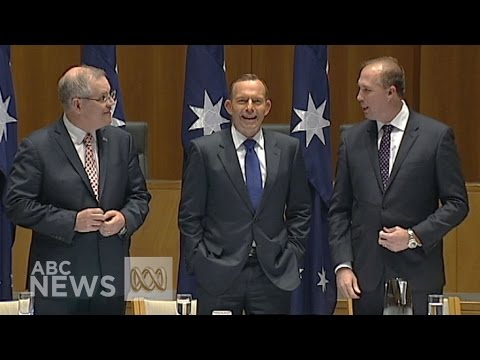 Reality heretics like Dutton, Abbott, Morrison and suchlike cannot be allowed to further pollute Australia’s dismal international reputation for what borders on criminal negligence of our environment, the LNP’s deification of coal and the shonky multi-million dollar grant to the Great Barrier Reef Foundation by the then Turnbull Government, notwithstanding.

In his speech at Friday night’s Australian Geographic Society Awards, Harry, Duke of Sussex, showed that he has a better grasp of the responsibilities of privilege than the monarchists of the loony far right in the Liberal Party:

We must appreciate our planet and what it has to offer. The world we live in cannot be replicated or tamed — it is a wild place where beauty takes time to form, in most cases, thousands of years, and without it, we are nothing.

Year after year, we hear increasing reports of human-wildlife conflict, how little time we have before it’s too late to counter the impact of climate change and how we can no longer sacrifice sustainability in development. The idea that these are the next generation’s problems is not a view we can accept.

I know that here in Australia you have particular challenges such as coral bleaching on your magnificent Great Barrier Reef, recurring drought and ever increasingbush fires. It is absolutely heartbreaking to see your natural treasures being changed forever. I was amazed to see that Australia supports up to 700,000 native species, a high proportion of which are found nowhere else on earth.

… I think we can agree… that there cannot be any more excuses.

The two-day Our Ocean Conference has a jam-packed itinerary and is categoric in its theme and the fight on its collective hands.

The oceans carry not only living artifacts and history, but also the promise of our future. Its undulating vastness holds our key to economic growth, food security resources as well as solution to curb the impact of climate change. However, the oceans are under immense pressure due to adverse impact of human activities. Marine pollution, bleaching coral reefs, raising sea temperature, and unsustainable fishing continues to occur. Indirect threat to the oceans also uncloaked with the recent findings on human trafficking in fishing operations, wildlife trafficking, as well as arms and drugs smuggling.

We have a choice to choose the kind of legacy we will leave for the future generations; and that choice depends on the actions we take today. Our Ocean, Our Legacy will be the theme of this year’s Our Ocean Conference, as it reflects our choices and actions to maintain the sustainability of our oceans’ resources and to preserve our ocean’s health, as a heritage presented for our children and grandchildren.

The main objective of Our Ocean Conference is to increase as well as enhance the collaboration and partnership between various ocean stakeholders, which is translated into concrete and actionable commitments. Participants are encouraged to announce their commitments during the conference, as it critically contributes towards global efforts to preserve the oceans’ health. Discussions during the Conference will highlight integrated and actionable solutions, which remove barriers between sectors, disciplines, and financing streams to comprehensively address the ocean as an inter-connected system and economy.

Our Ocean Conference 2018 will continue to focus on marine protected areas, sustainable fisheries, marine pollution, and climate change-related impacts to the oceans. This year’s Our Ocean Conference will also maintain the crosscutting themes of sustainable blue economy and maritime security, as introduced by the European Union in 2017.

There continues to be strong and lingering sentiment within the wider electorate that Australia itself, as well as Malcolm Turnbull, was wronged by the Liberal Party.

Malcolm Turnbull will represent Australia at the ‘Our Ocean Our Legacy’ conference, a climate change forum in Bali.

.@ScottMorrisonMP: This decision was made weeks ago … and is in Australia’s national interest.

Nothing at all has been achieved by his eviction. In fact, the Liberal and National parties have regressed. If the Liberals thought they had little chance of winning the next Federal election with Turnbull as PM, they now have Buckley’s chance.

The depth of the schism between the neocons and moderates of the Liberal National Party Coalition is now too great for any meaningful reconciliation to happen before the pending Federal Election.

For the electorate, Opposition Leader Bill Shorten remains an uninspiring proposition and the likes of Opposition Deputy Leader Tanya Plibersek and Member for Grayndler Anthony Albanese remain coherent and more trusted prospects as leaders. Moreover, they both appear decent people. We are hungering for decent and principled leaders.

If Labor under Shorten is elected, it will be by default and as a result of the self-induced imploding of the Coalition.

There is clearly still great public sentiment and a sense of loss in relation to the knifing of Malcolm Turnbull, even despite his disappointing political paralysis on so many issues.

There is anger at the way he was betrayed and usurped. It’s fair to say that Australia has an emotional relationship with Turnbull. We’ve grown up with him as he’s grown up. Maybe.

The old parties per se have decreased in relevance and are obsessed with power for its own sake and not for the privilege of serving the people.

What do we want? Real governance for the people.

When do we want it? Now!

Interviews with the eloquent & thoughtful Cathy McGowan, Rebekha Sharkie & Andrew Wilkie in the past 24 hours demonstrate exactly why so many Australians are turning away from the major parties.

And there was barely a regurgitated talking-point in sight! ?