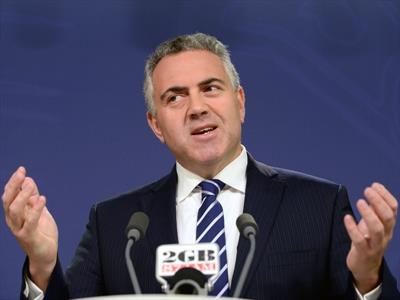 The budget and economic forecasts in the Pre-election Economic and Fiscal Outlook (PEFO) released on Tuesday are almost identical to those in the government’s 2 August economic update.

So Mr Hockey focused on commentary in the document outlining the international risks posed to the projections from the Treasury and Finance departments.

“The downside risks are substantial,” he told reporters in Melbourne.

“These need to be carefully considered by the coalition.”

The risks include the unresolved crisis in the eurozone, anxiety in financial markets about the unwinding of US monetary policy, lingering concerns about the recovery in Japan and economic developments in China.

“These are some of the risks, but overwhelmingly the greatest risk is obviously the re-election of a bad Labor government,” Mr Hockey said.

Mr Hockey said the coalition will release costings for its election promises well before the 7 September election, pointing out that in 2007 and 2010 Labor didn’t release theirs until the evening before polling day.

“We will do better than the day before the election,” Mr Hockey said.

“We are going to go through things methodically, carefully, prudently.”

He said the coalition had submitted more than 200 policies to the Parliamentary Budget Office for costing, a number of which are still to come back as a result of the government’s economic statement released on 2 August.

Opposition finance spokesman Andrew Robb said Labor had yet to submit its costings to Treasury for release through the official Election Costings Commitments website (www.electioncostings.gov.au).

“Given Labor’s track record of being utter failures at predicting and confirming their future spending … the community needs to know from Mr Rudd just when will they see his costings,” Mr Robb said.

“When you’ve done that you can start to lecture us on that issue.” – AAP