Clive Palmer pats Joe Hockey’s back, but slaps his budget

Clive Palmer has commended Joe Hockey's leadership in managing the budget but remains unsympathetic to the government's plans. 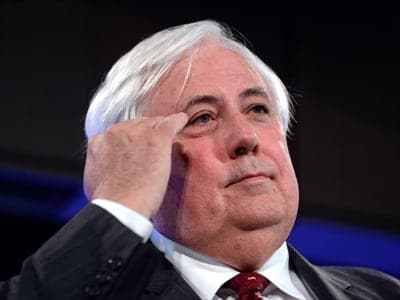 Clive Palmer says the best thing about his dinner with Joe Hockey was the meal, not the conversation.

The Palmer United Party leader hosted the treasurer in Brisbane on Tuesday night as part of the government’s bid to win critical Senate crossbench votes for its tough and unpopular budget.

“I liked the dessert – it was the best part,” Mr Palmer told ABC radio on Wednesday of the meeting.

Mr Palmer said while the two agreed on the need to align revenue with expenditure he made his thoughts about the fairness of the budget known.

“I don’t think the budget is fair at all,” he said.

Mr Palmer said he felt sympathy for Mr Hockey because he’s been left to manage the budget “mess” while Prime Minister Tony Abbott is overseas.

“The prime minister’s left the country at a time of critical economic crisis,” he said.

“But it does not change the fact you can’t desert the people of this country.”

Mr Palmer says he will have an open mind on higher education changes when he lunches with Education Minister Christopher Pyne on Wednesday.

But he says his party stands behind university students, not the government, and remains opposed to changes that peg HECS loans to the government bond rate.

Mr Palmer says the education minister faces a “pretty hard task” to convince him on deregulation.

“I would probably enjoy the lunch but it’s a very difficult thing (deregulation) to look at.”

The mining magnate would not reveal whether he would back the proposed $7 GP co-payment if it exempted pensioners and other vulnerable patients.

But he said healthcare should remain free, especially for the vulnerable.

Shadow treasurer Chris Bowen said it was clear why the government had failed to sell the “worst Budget in living memory” three months on from delivering it to the public.

Prime Minister Tony Abbott and Mr Hockey should do the honourable thing and start from scratch, beginning with scrapping the paid parental leave scheme, he said.

“Every day we see a new proposal by the government to change or scrap a key budget measure, this is a budget coming apart at the seams,” Mr Bowen said in a statement on Wednesday.

Mr Hockey refused to disclose any details of his dinner with Mr Palmer.

“I think it is hugely important that those discussions remain in a room and we continue the ongoing dialogue,” he told ABC Radio.

He said the government was prepared to discuss exempting pensioners and other vulnerable patients from the GP co-payment as has been called for by the Australian Medical Association.

However, the treasurer said pensioners would be better off in net terms under a budget that retains the clean energy supplement linked to the now abolished carbon tax.

Mr Hockey said he always expected the budget to be a hard sell, despite last week complaining he had become the most hated man in the country.

“I think there is a lot of overstated commentary on the budget – people are missing some self-deprecating humour along the way,” he said.

The government recognised Australians did not like some measures in the budget.