A journalist for The Australian has been kicked out of a press conference announcing Clive Palmer's candidates for the re-run Senate election in WA. 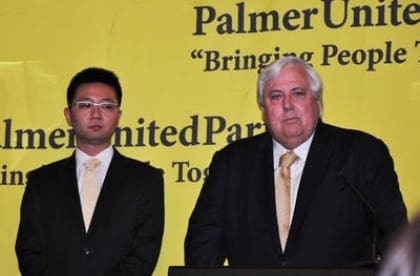 Clive Palmer says it’s not up to the major political parties to dictate who is allowed a voice in the Australian Senate, while simultaneously denying one media outlet its voice at a press conference.

Mr Palmer flew into Perth as the state’s governor was declaring April 5 as the date for the re-run Senate election, which nearly delivered the Palmer United Party a senator in September.

Dio Wang was elected, then denied by the bungled recount, which led to the High Court ruling that WA had to go back to the polls.

And announcing Mr Wang as the party’s number one candidate again – alongside former AFL footballer Des Headland and academic Chamonix Terblanche – Mr Palmer said the time was right for WA to have a major role in Canberra.

“This is a unique time in Western Australia’s history to put WA in the balance of power in the Senate,” Mr Palmer said.

“Our message is people should make their vote count.”

Even before his press conference had started, Mr Palmer had journalist Nick Perpitch from The Australian newspaper ejected, saying his publication was “antagonistic”.

Quizzed as to why he had thrown Mr Perpitch out, Mr Palmer said he did not recognise the publication.

“We don’t recognise The Australian as a newspaper, as simple as that. Mr (Rupert) Murdoch is unhappy that I don’t support Tony Abbott as prime minister,” he said.

Mr Headland’s presence on the PUP senate ticket follows his campaign for the lower house seat of Durack in the September election.

After Foreign Minister Julie Bishop had warned against voting for “fringe-dweller” parties, Mr Palmer said the public would make up their own mind.

“There is a resentment in WA that the state does not get a fair go,” he said. – AAP