Clive Palmer and former US vice-president Al Gore presented as an odd couple but they had nothing but admiration for each other as they talk over carbon tax and emissions trading scheme. 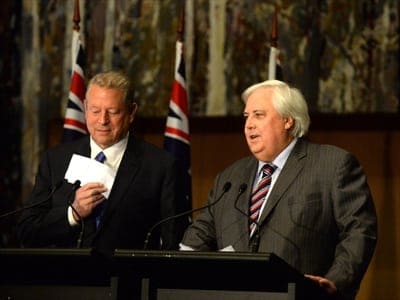 It was love before dinner for Clive Palmer and Al Gore.

The coal-mining billionaire and the climate change campaigner made an odd couple as they stood side by side in Canberra to announce Mr Palmer’s party would help repeal the carbon tax – as long as it’s replaced by a globally-linked emissions trading scheme.

Mr Palmer is no stranger to celebrity politics, but even he had stars in his eyes when he shared the podium with the former US vice-president.

America was a loser for not having elected Mr Gore to the top job, the Australian politician said.

Fortunately the rest of the world had benefited.

“It’s not the position that makes a leader. It’s his actions and examples which others can follow,” Mr Palmer told reporters.

“Others that are maybe less capable, like me, can see the light shining out of the darkness.”

Mr Gore was pleased about the discussions he’d had that led to the “extraordinary moment” of Mr Palmer’s announcement.

The supporter of carbon pricing and global action on climate change was in Australia for a Climate Reality Leadership Corps Training Program in Melbourne.

Mr Palmer flew him up to Canberra on Wednesday for discussions, the press conference and dinner.

After outlining how other countries are moving on climate change, Mr Gore congratulated the Palmer United Party “on this outstanding statement”.

With that, Mr Palmer announced they had to go to an “urgent dinner” and left before any questions could disturb the lovely atmosphere.