Cars may be the price of carbon tax repeal

The price of abolishing the carbon tax might be keeping Australia's car enthusiasts happy. 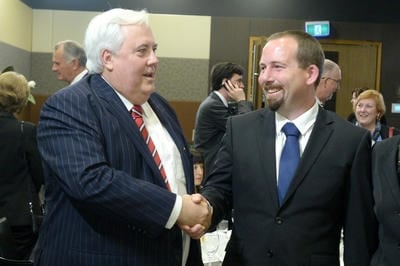 The price of abolishing the price on carbon might be the price of keeping the car industry alive for Prime Minister Tony Abbott.

After a meeting with the Palmer United Party (PUP), in which leader Clive Palmer committed his Senate team to back the repeal of Labor’s carbon tax, Mr Abbott said he was confident it would be axed within a fortnight.

The three PUP senators, the Motoring Enthusiasts’ Ricky Muir and two other crossbenchers are expected to vote with the government when the upper house sits again from July 7.

However, there is speculation Senator Muir’s vote may not be a sure thing.

His support for repealing the carbon tax hangs on the government agreeing to greater assistance for the car industry.

Labor and union groups have been highly critical of the coalition’s approach to the ailing automotive sector, with the government ruling out propping up the industry with further handouts.

The prime minister reassured Mr Muir the automotive transformation scheme was confirmed in the budget.

“There’s $1 billion available to manufacturers and to the auto parts industry over the next five years,” he said.

Mr Abbott will already need to juggle his policy victory with Clive Palmer’s plan for an emissions trading scheme drafted with a zero-dollar starting price, to be activated when Australia’s trading partners set a price.

Mr Abbott has previously labelled an ETS as the carbon tax by another name.

Australian Greens leader Christine Milne said it was too early for the government to be celebrating a win.

“It is way to early for the government to be doing high fives in imagining that they have destroyed a price on pollution,” she told reporters in Sydney on Friday.

But Mr Abbott said he’d been encouraged by talks with Mr Palmer and was confident the legislation would be scrapped once and for all.

Though the government wasn’t “taking anything for granted”, he said.

“Let’s hope it’s finally delivered when the government and the crossbenchers keep their commitments to the Australian people in a couple of weeks time,” he told reporters in Sydney on Friday.

Labor frontbencher Chris Bowen was scathing of the talks between PUP and the coalition.

“No matter what deal Tony Abbott manages to cobble together with Clive Palmer, Australians will be worse off as a result of this week in parliament,” he told reporters in Sydney on Friday.