Business has high hopes for G20: B20 chair

The first formal meeting of this weekend's G20 event, hosted by Joe Hockey, got under way with a gathering of world business leaders with the B20 business forum focussing on jobs and growth. 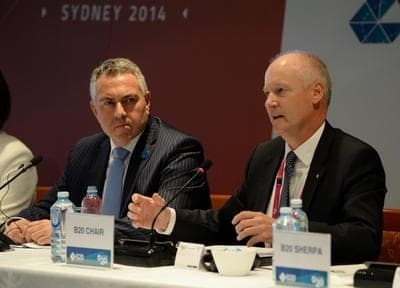 Treasurer Joe Hockey wants the Group of 20 (G20) to aim for more private-sector investment for infrastructure.

Mr Hockey will host finance ministers and central bankers from the world’s largest economies this weekend at the first G20 meeting under Australia’s 2014 presidency.

In the first formal meeting of the G20 process, the treasurer told delegates of the B20 – the business arm of the forum – infrastructure would be a key priority.

He said that in the next six years, the Australian government would spend $39 billion on new infrastructure, particularly in major cities.

“But there is a lot of work to do and the job is never-ending,” he said in his opening remarks.

B20 chairman and Wesfarmers chief executive Richard Goyder said the business forum’s focus would on economic growth and jobs.

He said there was a high expectation there would be positive outcomes from the G20 in 2014.

“Certainly, at a B20 level we are looking for discreet actions where there can be identifiable plans and progress them in the years ahead,” he told the meeting.

He said it was “pretty clear” there was a significant gap of about $57 trillion in infrastructure spending around the world.

If that infrastructure gap can be plugged, it could lift economic growth by an estimated three per cent.

“I think that is something well worth entertaining,” he said.

He said there was no shortage of either capital or project-management skills.

“There is a need to develop plans between business, government, financial institutions and the communities in which we live and work to get this expenditure in infrastructure happening,” Mr Hockey said.

“The dividend for developed and developing countries is significant.”

The rest of the meeting was held behind closed doors.

IMAGE: Australian Treasurer Joe Hockey (L) and CEO of Wesfarmers, and B20 Chairperson Richard Goyder speak at the Joint G20 and B20 Infrastructure Roundtable, as part of the G20 Finance Ministers and Central Bank Governors meeting, in Sydney, Friday, Feb. 21, 2014. (AAP Image/Dan Himbrechts)