Bushfires flare up across NSW

Three top-level emergency warnings have been declared in NSW affecting residents in the Blue Mountains and Southern Highlands. 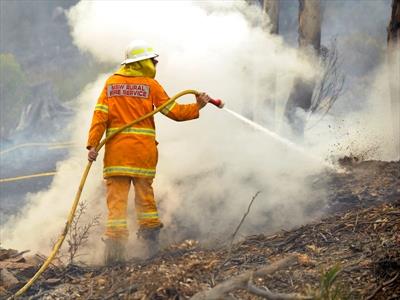 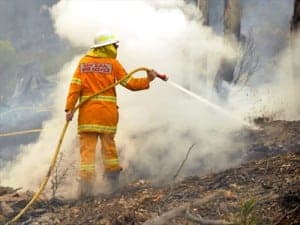 THREE top-level emergency warnings are in place across NSW with bushfires flaring up across the state as the feared hot and gusty conditions begin to materialise.

Residents along Bells Line of Road remain under threat from the massive State Mine Fire burning between Lithgow and the Blue Mountains, west of Sydney, which authorities fear could join with others in the area to become one “mega-fire” stretching over 300km.

The Rural Fire Service (RFS) on Monday also issued an emergency warning for the Springwood fire in the lower mountains, which flared up again between Chapman Parade and Grose Road near Faulconbridge.

Residents in the area have been urged to shelter in their homes and monitor the RFS website and local radio for street-specific information.

Workers at an evacuation centre at the Springwood sports club are preparing for an influx of people.

An emergency warning has also been declared for a bushfire at Balmoral in the southern highlands, which is blowing burning embers into the town of Wilton, southwest of Sydney.

Residents there have been told to watch for spot fires that may begin on their properties and seek shelter as the fire front approaches.

RFS Commissioner Shane Fitzsimmons said the emergency in the southern highlands fire is “well and truly heading towards Wilton” and crews have been deployed to protect a nearby natural gas facility from the flames.

He said fears of a merger of two Blue Mountains fires – the State Mine Fire and the Mount Victoria blaze – could be realised by Tuesday.

“I suspect (the two fires will meet) somewhere in the middle of the Grose Valley,” he said on Monday afternoon.

“It’s only about three to five kilometres apart in some areas, it won’t take that long for (them) to join together.”

More than 200 homes have already been destroyed in the fires.

Police on Monday said they had charged an 11-year-old boy with starting two fires near Newcastle on October 13.

A 14-year-old boy has also been charged with starting a fire at Rutherford on Sunday and two girls aged 12 and 13 were previously charged with deliberately lighting a grass fire in Sydney’s west the previous day.

“It’s one thing to be an adult criminal in setting fire,” he told reporters.

“It’s another thing, and it saddens me, that young people could actually not see the consequences of this sort of reckless behaviour.”

Springwood resident Kate Trinh arrived at the Springwood evacuation centre about 4pm on Monday after receiving a text alert from the RFS.

She said there was thick ash and smoke in her home near Springwood.

“We thought we’d take the two kids and come here rather than wait and see what happens,” she told AAP as she tried to wrangle her five-year-old son Oliver.

The family home is surrounded by bush, but Ms Trinh said she didn’t want to take the risk of staying to fight.

“It’s just one of those situations where if it happens it happens,” she said.

“You’re living in the bush so you’ve got to expect it.”

Ms Trihn, husband Thy, Oliver and his 13-month-old brother Jaiden will stay at the evacuation centre until they receive the all clear from authorities.

The insurance bill from the NSW fires is now up to $94 million with 855 claims made, the Insurance Council of Australia says. – AAP