Labor has failed to secure an investigation into Speaker Bronwyn Bishop's use of her parliamentary suite for a Liberal fundraising event. 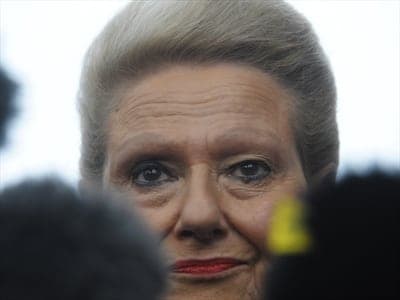 Speaker Bronwyn Bishop has refused to reveal details of how her parliamentary office was used for a Liberal Party fundraising event.

Labor says a $2500 a head budget night function in the Speaker’s Parliament House office – revealed in weekend newspaper reports and not denied by Ms Bishop – is unprecedented and breaches the independence of the role.

Ms Bishop told parliament on Monday that all members of parliament were entitled to use their suites “for their own purposes, but not for illegal purposes”.

The opposition asked her to reflect on her ruling, but she stood by her statement.

Now Labor has written to the privileges committee asking for an investigation.

A motion asking the House to refer the same was voted down.

“This is a motion about smear and innuendo directed at the speaker’s office,” Leader of the House Christopher Pyne said, noting political fundraising events were held in Parliament House all the time.

As long as the costs were covered privately or by a political party there was no breach of the rules, he said.

Opposition frontbencher Tony Burke said the speaker’s suite was a special case and the fundraiser represented “improper interference” in the independence of the office.

“This is not an ordinary venue,” he told parliament.

“Your job is not owned by the Liberal Party.”

Prime Minister Tony Abbott, who is understood to have attended the fundraiser, told parliament Labor was looking for distractions from its lack of policy.

“They worry about what might be in what room at what time in this parliament,” he said.

Taking aim at Labor leader Bill Shorten the prime minister said: “Really and truly, this man is no Bob Hawke – he is no leader.”

Labor has been critical of Ms Bishop’s appointment from an early stage, especially in her handling of question time and biased language.

She has suspended 101 opposition MPs from parliament, but none from the government.

That image was reinforced when Ms Bishop said, after Mr Burke finished his speech: “I find it a bit rough to be lectured on morality from you.”

Earlier, the secretary of the Department of Parliamentary Services, Carol Mills, told a Senate estimates hearing she was unaware of any rule preventing such a use of the speaker’s suite.

“It is up to the speaker, president or the other holders of special suites to decide how to use them,” she said.

Greens senator Lee Rhiannon asked for a list of events held in Parliament House over the past three years to ascertain how many were party fundraisers.