Startling evidence that British scientists secretly tested up to 21,830 dead young Australians, without the knowledge of their parents, for radiation contamination following nuclear weapons tests in the 1950s. 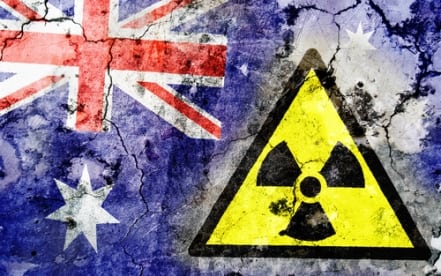 Dead Australians were tested for nuclear radiation contamination following nuclear tests, according to a new book.

The author of Maralinga, Frank Walker, laid his hands on minutes of a top secret UK Atomic Energy Research Establishment meeting in England on 24 May 1957 approving a program to determine the long-term effects of the tests on Australia and its citizens.

In his book, Walker describes how officials at the meeting, chaired by Professor Ernest Titterton, decided to first obtain soil samples from pasture regions near Adelaide, Sydney, Melbourne, Brisbane and Perth to check for fallout from the nine nuclear bombs detonated at Maralinga in the Australian Outback and the Monte Bello Islands, off WA.

The group also sought to collect animal bones from the regions around where the nuclear explosions were carried out.

In the document, the professor says that the final phase of testing would be to determine if Strontium-90 was being absorbed by the Australian population – most likely through the food chain.

“We have to find out if Strontium-90 is entering the food chain and getting into humans,” says the document. 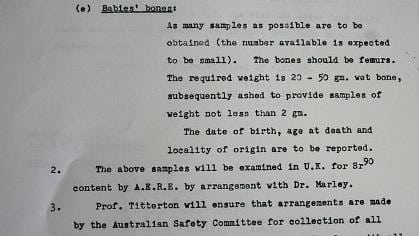 The scientists then agreed to start testing the bones of dead Australian infants and children for radiation contamination.

Acting on these orders, hundreds of bones from the bodies of 21,830 dead babies, infants, children, teenagers and young adults across Australia were collected without the knowledge of their parents, according to Adelaide newspaper, The Advertiser.

In a 2001 report to then federal health minister, Michael Wooldridge, the Australian Radiation Protection and Nuclear Safety Agency said it had detected varying levels of Strontium-90 in the bone ash samples it had collected from hospitals in Adelaide, Sydney, Perth, Brisbane and Melbourne.

According to Wikipedia: “British Nuclear tests at Maralinga occurred between 1956 and 1963 at the Maralinga site, part of the Woomera Prohibited Area in South Australia and about 800 kilometres north-west of Adelaide. A total of seven nuclear tests were performed, with approximate yields ranging from 1 to 27 kilotonnes of TNT (4.2 to 113.0 TJ).

“Two major test series were conducted at the Maralinga site: Operation Buffalo and Operation Antler. The site was also used for hundreds of minor trials, many of which were intended to investigate the effects of fire or non-nuclear explosions on atomic weapons.

“The site was contaminated with radioactive materials and an initial cleanup was attempted in 1967. The McClelland Royal Commission, an examination of the effects of the tests, delivered its report in 1985 and found that significant radiation hazards still existed at many of the Maralinga test areas. It recommended another cleanup, which was completed in 2000 at a cost of $108 million. Debate continued over the safety of the site and the long-term health effects on the traditional Aboriginal owners of the land and former personnel. In 1994, the Australian Government paid compensation amounting to $13.5 million to the local Maralinga Tjarutja people.”