Tragedy in yet another fatal Australian shark attack, this time a British man in Byron Bay. 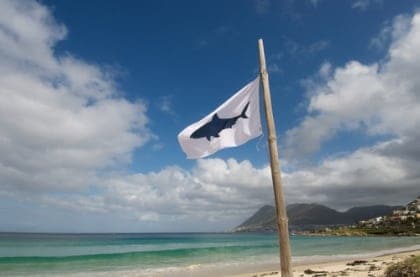 Byron Bay and the British expat community in Australia were shocked by the death of a man who was mauled during his morning swim.

Paul Wilcox, a 50-year-old Wales native, was attacked and killed meters from Clarke’s Beach, Byron Bay as his shocked wife looked on.  The beach has traditionally been one of the safer and more sheltered beaches, but it was turned into a death trap for Wilcox as he went for his usual morning swim just after 10:30 am on Tuesday.

Mr Wilcox, who was bitten above the right knee, was brought to shore by paddle boarder Mark Hickey.  “I saw what looked like seaweed but it was blood in the water,” said Mr Hickey.

“I thought it was a dead turtle, but then I could see the shark circling and the object moving. The shark came back to him and had another go. I didn’t know it was a person but when I realised I ran out and waded to the bank and grabbed him and did CPR, but it was too late.”

A police statement said that it is believed that Mr Wilcox was killed by a great white shark believed to be about 13-foot long.

“It’s not confirmed at this stage but it looks like it’s a great white,” said Bobbie Cullen, a local police spokeswoman. “I’m pretty sure he [Mr Wilcox was out swimming on his own. His wife was on the beach at the time. He was only 15 or 20 metres from the beach.”

Byron Bay is a favourite destination of many tourists including 300,000 Brits who vacation at the beach every year.

Mayor of Byron Bay, Simon Richardson, said the death came as a shock to the community but said it was unlikely to deter tourists.  Speaking to The Telegraph Richardson said, “I wouldn’t expect any great lingering effect.  In Australia we acknowledge there is an inherent risk in the ocean. Byron is known to have sharks around in the headland. It has generally been safe for a long time. Occasionally luck can be against anyone who goes out in the ocean.”

Manager of the Byron Bay swimming club Syl Reid agreed that shark attacks were rare. “It is a pretty isolated incident,” he told The Telegraph.

According to the BBC, Wilcox had settled in Australia some years ago. His mother said he had loved living in Australia and long dreamed of retiring to Byron Bay.

Earlier this week we reported on a study by the Bond University stating that 98% of all shark attack victims are men.

November 29, 2013 – Zac Young, 19, attacked while bodyboarding on the east coast, about 150 miles from the latest attack

October 10, 2011 – Bryn Martin, 64, attacked, apparently while swimming off popular beach in Perth on the west coast

September 4, 2011 – Kyle Burden, 21, attacked while bodyboarding off the west coast