Amnesty poll reveals global extent of torture fear while blaming the increasing acceptance of the practice partly on television. 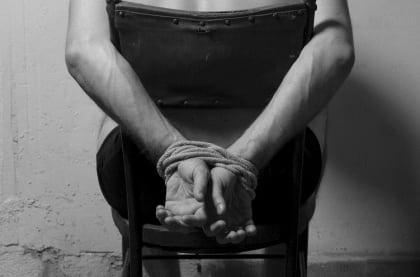 Nearly half the world’s population fear torture should they be arrested.

This was revealed by the London-based international organization Amnesty International’s recent poll of 21 countries. As many as 44% of the people interviewed in the poll felt there was a real danger that they would be mistreated or even tortured should they be detained in their country.

According to the poll 16% of Australians and 15% of Britons fear being tortured while in the custody of authorities. In contrast, 80% of Brazilians are convinced that they will be tortured after an arrest.

“Although governments have prohibited this dehumanizing practice in law and have recognized global disgust at its existence, many of them are carrying out torture or facilitating it in practice,” Amnesty International said.

Amnesty International reports that, 30 years after the UN Convention was first convened they are still uncovering evidence that governments around the world are breaching, what is considered, international human rights. And betraying their undertaking to banish torture.

According to Reuters, Amnesty International recorded incidents of torture and human right’s violations in 141 countries.  Of the 144 reports, 79 reports came from the original 155 countries that signed the 1984 Convention Against Torture.

While British and Australian citizens seem the least concerned about suffering a violation of their human rights, at 15% and 16% respectively, the situation is much grimmer elsewhere in the world.  Brazilians seem to live in the most fear with 80% of those surveyed believing they will be tortured while in federal custody and 64% of the Mexican population fearing for their safety too.

The United National Committee Against Torture (UNCAT) states, “Torture means any act by which severe pain or suffering, whether physical or mental, is intentionally inflicted on a person for such purposes as obtaining from him or a third person information or a confession, punishing him for an act he or third person, or for any reason based on incrimination of any kind, when such pain or suffering is inflicted by or at the instigation of or with the consent or acquiescence of a public official or other person acting in an official capacity.”

General Salil Shetty Amnesty Secretary of Stop Torture in London warns that there seems to be a growing tolerance of torture. And that some of the respondents in the survey said torture was acceptable in some.

“It’s almost become normalized, it’s become routine.  Since the so-called war against terrorism, the use of torture, particularly in the United States and their sphere of influence… has got so much more normalized as part of national security expectations, ” said Shetty.

Hollywood films and television shows like ‘24’ and ‘Homeland’ have desensitized the public to torture said Amnesty International adding that in countries like Britain these shows and films appear to be fostering the popularity of anti-terror themed television dramas.