Brexit: parliament sends May back to Brussels – what latest amendment votes mean

OPINION & ANALYSIS: With the clear majority voting against a no-deal Brexit, the ticking clock works in the prime minister’s favour. 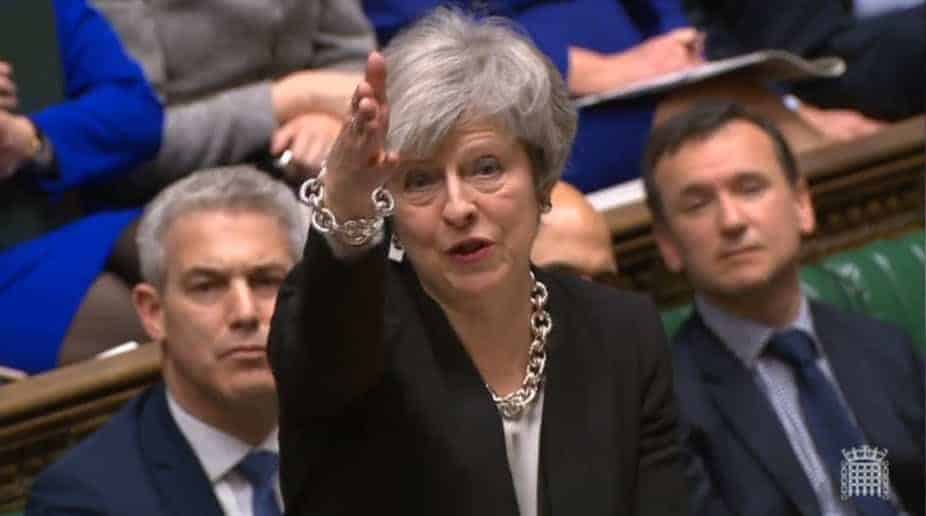 In its attempts to find a way out of the Brexit impasse, the House of Commons has passed an amendment that gives Theresa May the green light to reopen talks with the European Union about what happens to the Irish border after Brexit – a key sticking point in getting her deal through parliament. Fancy your odds are better than May’s? Find out now with your Paddy power promo code. MPs have also voted to reject a no-deal Brexit. And in a final development on a busy day in the Brexit story, opposition leader Jeremy Corbyn has also agreed to enter talks with the prime minister to find a way forward. But many of these developments raise more questions than they answer.

The Irish backstop is an issue which has caused frustration not just on the Conservative benches, but also with the government’s confidence-and-supply partner, the Democratic Unionist Party (DUP). The amendment which was passed on this topic was tabled by Graham Brady, a Conservative backbencher and chairman of the party’s 1922 Committee. It commits the prime minister to seeking “alternative arrangements” for the backstop, though during the debate that came ahead of the vote, government ministers repeatedly refused to be drawn on what those alternative arrangements might be.

As the countdown to March 29 continues, this will be seen by many as a sign that progress is being made as there is a majority in favour of an amended deal. Yet in parliamentary terms, the UK is no closer to leaving with a deal than it was in December. The prime minister still has a lot of work to do.

May nevertheless sees the amendment as giving her a firm mandate to return to the EU and seek a new version of the Brexit deal. In a further sign that she has heeded the concerns of her own backbenchers, the prime minister also agreed to sit down and discuss the so called “Malthouse Compromise” – a proposal on the backstop agreed in secret between Conservative Brexiteers and Remainers and facilitated by some government ministers. It is not a parliamentary amendment but is an important behind-the-scenes movement as the government strives to reach some sort of consensus among MPs.

That said, while the prime minister may have her mandate to push for an amended deal, the EU has said it does not wish to renegotiate terms. In a statement released shortly after the vote, a spokesman for European Council president Donald Tusk said: “The backstop is part of the withdrawal agreement and the withdrawal agreement is not open for re-negotiation.” May will be hoping that with 317 MPs firmly behind her, Brussels will shift ground.

The surprise of the night was a narrow eight-vote victory for an amendment tabled by Conservative MP Caroline Spelman and Labour MP Jack Dromey. It aims to prevent a no-deal Brexit, though it does not come with legal underpinnings. Although it’s unlikely that the government thought this amendment would pass, it’s potency is somewhat muted given that the prime minister has consistently said that passing amendments of this form are a waste of time; and that the only way to stop no deal is to vote for a deal. It’s unlikely to mean much, other than emphasising that there is a political will in the Commons to avoid leaving the EU on March 29 without a deal.

Jeremy Corbyn, the leader of the opposition, had refused any meetings with the prime minister over the past few weeks, saying repeatedly that he would not do so without preconditions being met, including the prime minister ruling out no deal. As a result, he is the only opposition party leader not to have met with May as she seeks consensus – although it should be noted that she initially extended the invitation to everyone except Corbyn. Yet Corbyn has now had a change of heart following the vote opposing a no deal exit and agreed to a meeting. This could prove highly significant over the next couple of weeks – movement on the Labour benches could help May’s next proposition cross the finish line.

An amendment from Dominic Grieve, the Conservative backbencher who was largely responsible for forcing the government to come back to the Commons so soon after the meaningful vote last week failed to pass. The same went for Labour MP Yvette Cooper – whose amendment was only supported by leader of the opposition Jeremy Corbyn at the eleventh hour.

Both the Cooper and the Grieve amendments sought to suspend the usual Commons rules in which the government has control of business, and give more power to the Commons to control the Brexit process. The Grieve amendment would have allowed MPs to vote on a series of options for the withdrawal process, while the Cooper amendment sought to avoid a no-deal Brexit by making it legally binding on the prime minister to extend Article 50 if parliament had not agreed on a final Brexit deal by February 26. More MPs than expected voted against the Cooper amendment – perhaps a sign that Conservative MPs realised the Brady amendment would bring greater rewards.

The prime minister has said that she will go back to the EU and seek to reopen the Brexit package on offer. But with the EU currently saying it is unwilling to re-open talks on the deal, it is unclear at the moment what her next steps will be. She will, however, continue to meet with MPs including senior Conservative backbenchers and the DUP as she works towards an amended offer for parliament. With the clear majority voting against a no-deal Brexit, the ticking clock works in the prime minister’s favour. If the only way to avoid no deal is for parliament to take a favourable stance on an amended deal, they may have to support her deal in one form or another.

Parliament has a lot of work to do and it is running out of time in which to do it. There are limited sitting days between now and March 29, including a February recess. Assuming that an amended deal will be passed by the Commons next month, the house will still need to debate, (possibly) amend and pass a withdrawal agreement bill before the designated leave date. We may see the recess cancelled or the announcement of extra sitting days (Fridays could be used) between now and then. Either way, it’s going to be an even busier month for MPs as the Brexit clock ticks down.

By Louise Thompson, Senior Lecturer in Politics, University of Manchester

TOP IMAGE: May is charting a clear course – back to Brussels to re-open negotiations. (PA/The Conversation)